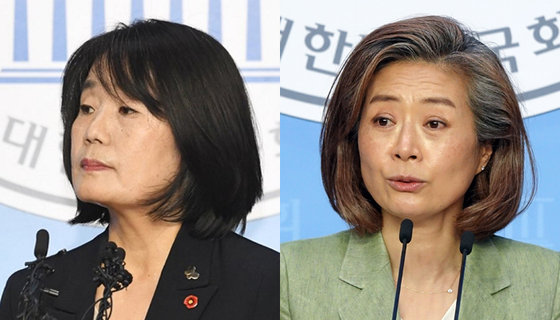 
The ruling party on Tuesday kicked out two proportional lawmakers over their suspicious real estate purchases, based on the anti-corruption watchdog’s probe outcome.

The Democratic Party (DP) held a general assembly of its lawmakers and approved the expulsion of Reps. Youn Mee-hyang and Yang Yi Won-young. 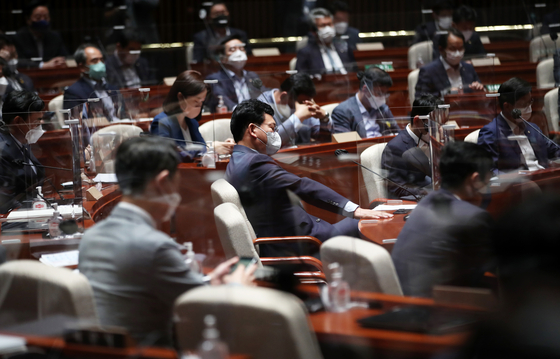 Lawmakers of the ruling Democratic Party hold a general assembly of lawmakers on Tuesday at the National Assembly. [NEWS1]


They will be able to maintain their seats in the National Assembly as independent lawmakers because they were kicked out of the party, as opposed to giving up their party memberships voluntarily. If they had left the party voluntarily, their seats would have been succeeded by other DP candidates.

“Before we voted on the two proportional lawmakers’ expulsion, we made clear that they will be able to return to the party if their charges are cleared,” Rep. Shin Hyun-young, spokeswoman of the DP, said Tuesday. “It was a heartbreaking decision, but we did so to show the people that the DP lawmakers will not make illegal real estate investments and to clear up all suspicions.”

Both Youn and Yang Yi took turns to defend their innocence before the lawmakers. A majority of the lawmakers who participated in the meeting still voted for their expulsion.

Earlier this month, the Anti-Corruption and Civil Rights Commission announced that it discovered 16 cases of suspicious land transactions involving 12 lawmakers from the DP and their spouses or immediate family. Among them, Youn and Yang Yi were proportional lawmakers while 10 others were district representatives.

Youn was suspected of using another person’s identity to purchase real estate. Yang Yi was accused of violating the law governing farmland.

The DP leadership later told the 12 lawmakers to leave the party. The DP said it asked individuals to put the party first and return later if their names are cleared.

Four others, however, are resisting the party leadership’s pressure to leave the party. Reps. Kim Han-jung, Kim Hoi-jae, Oh Young-hun and Woo Sang-ho are insisting on their innocence.

After the expulsion of two proportional lawmakers and the voluntary departure of six district lawmakers are formalized, the DP’s number of lawmakers will be reduced from 174 to 166.

“Not all PPP lawmakers submitted the anti-corruption commission written agreements to use private information concerning their family members,” DP spokeswoman Shin said. “I urge them to cooperate with the probe as soon as possible.”

The Anti-Corruption and Civil Rights Commission said Monday that it delayed a probe into all real estate dealings of the PPP lawmakers and their families due to incomplete paperwork.

The commission said it will start looking into the real estate matters of five smaller opposition parties and independent Rep. Hong Joon-pyo. The five minority parties requested the probe on June 9.

The PPP requested a similar probe to the anti-corruption commission on June 11, but the watchdog said it does not have all necessary documents to start the investigation.

“For the sake of procedural fairness with the DP, we asked the PPP to submit the documents, and we will start the probe as soon as we have the complete sets of documents,” Heo Jae-wu, spokesman of the anti-corruption commission, said Monday.