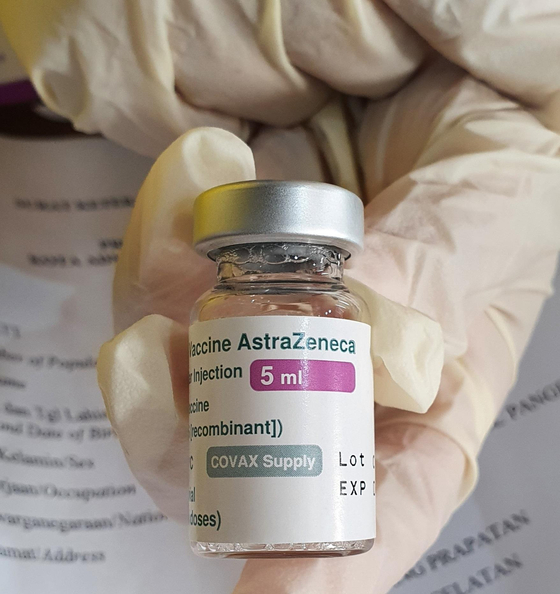 A vial of the AstraZeneca Covid-19 vaccine. [YONHAP]


Health authorities acknowledged for the first time that a Covid-19 vaccine led to a death.

According to the Korea Disease Control and Prevention Agency (KDCA), its Vaccination Damage Investigation Team reviewed 224 out of 293 reported deaths as of Monday, and acknowledged just one, a man in his 30s who was administered the AstraZeneca vaccine.

It was the first time Korea admitted a vaccine-related death since its vaccination campaign began in February.

The man was inoculated on May 27 and started experiencing severe headaches and nausea nine days later. He visited a medical clinic but the symptoms didn’t improve.

He was hospitalized on June 8 and diagnosed with unusual blood clots with low blood platelets — termed thrombosis with thrombocytopenia syndrome, or TTS — but died on June 16 in an intensive care unit.

TTS is considered a rare yet serious adverse reaction that can be caused by a viral vector vaccine like AstraZeneca or Janssen.

In April, the European Medicines Agency (EMA) concluded that unusual blood clots with low blood platelets should be listed as very rare side effects of AstraZeneca shots. The KDCA also warned of the danger, and limited inoculations of viral vector vaccines to people 30 and over.

The KDCA advises people who experience suspected symptoms of TTS four to 28 days after an AstraZeneca or Janssen vaccination to immediately visit a medical institution and take a blood test to check platelet levels. It can be “recovered from after early detection and with proper treatment,” it says.

Symptoms include severe headache, chest pain, continuous abdominal pain, and arm and leg swelling. Bruising in areas other than where the shot was given is also a symptom.

After the KDCA's announcement Tuesday, users of internet forums popular with young people such as FM Korea, DC Inside and Daum Cafe expressed worries about vaccine side effects and skepticism about the admission.

One commented, “I bet they won’t acknowledge any more after this.” And another wrote, “Only one acknowledged out of hundreds of deaths? If I die, then it’s really going to be a dog’s death, without receiving any compensation.”

Another user wrote, “It’s really frustrating that the country says there are no causalities every time, even though it’s true that a healthy person suffers a stroke or other symptoms after an AstraZeneca jab. Will they pay compensation only when a person dies?”

When adverse reactions are reported after vaccinations, they are investigated by metropolitan or provincial epidemiological investigators. Then, experts in the damage investigation team set up by the KDCA decide on any causality based on medical records and other information. A causal link with the vaccine should be recognized for the patient to receive compensation.

Although the government has promised proper compensation, experts say it got off to a slow start.

“Health authorities weren’t actively responding to adverse reaction events as they were desperate to attain the goal of inoculating 13 million people [in the first half of the year],” said Kim Woo-joo, a professor of infectious diseases at Korea University Guro Hospital.

“A diagnostic method called Platelet Factor 4 (PF4) antibody test is used when diagnosing TTS, but Korea was late in establishing a system for the test. I believe there were more TTS patients before the two cases confirmed as Korea couldn’t examine the cases until recently,” Kim added.

In May, Korea confirmed its first case of an unusual type of blood clotting in another man in his early 30s who received an AstraZeneca Covid-19 shot last month, but he recovered.

The PF4 antibody test has been operated only since May 21, and only at Asan Medical Center in Seoul.

Once a causal connection is recognized, the government has said it will pay up to around 437 million won ($385,000) in compensation in cases of severe disability or death. For very severe symptoms, it has said it may compensate even if a causal link is ambiguous.

As of June 18, a total of 353 cases of abnormal reactions were compensated, according to data released by the main opposition party’s Rep. Suh Jung-sook.

“As President Moon Jae-in vowed last January that the government will take full responsibility for vaccine side effects, they should expand compensation for vaccination damages,” Rep. Suh said.