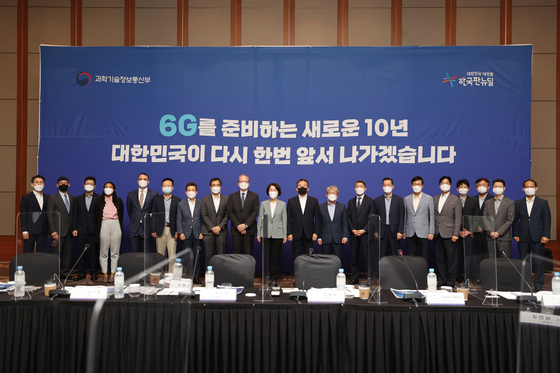 Science Minister Lim Hye-sook, tenth from left, poses with the participants of the even hosted by the ministry to discuss the Korean government's 6G strategy on Wednesday at Conrad Hotel in western Seoul. [YONHAP]


The Korean government plans to spend 220 billion won ($194 million) by 2025 on the research and development of 6G network technology, vowing to ensure the early deployment of the next-generation network via cross-border partnerships — especially with the United States.

The Science Ministry on Wednesday announced the signing of a memorandum of understanding with the U.S. National Science Foundation (NSF) on the joint 6G research project, alongside the financial commitment.

The cooperation is in conjunction with a commitment made during the Korea-U.S. summit last month, according to the ministry, although details of the collaboration have yet to be confirmed.

Robert Rapson, acting U.S. ambassador to Korea, attended a Wednesday event designed to celebrate the agreement and discuss the government’s 6G strategy together with representatives from Samsung Electronics, SK Telecom and other tech companies.

The ministry is also seeking to forge similar partnerships with other technologically-advanced countries like Finland and China.

“[Korea] plans to team up with the NSF, China’s China Academy of Information and Communications Technology, and the University of Oulu in Finland in developing core technologies for 6G,” the ministry said in a statement.

The Moon Jae-in administration has set the goal of commercializing a 6G network as early as 2028 to become one of the earliest countries to embrace the network standard set to succeed 5G.

At the heart of the 6G project is the goal of linking satellites and terrestrial networks into a single network in order to ensure faster internet access for drones and other urban air mobility devices or for people in remote areas.

In line with the initiative, the ministry will embark on an ambitious journey that resembles Space X’s Starlink project as it plans to launch 14 low orbit satellites by 2031.

It will also spearhead the development of the networking technology to enable interoperability between satellite-based networks and those on the ground in cooperation with the private companies and research institutions.

In the initial stage, however, the funding will be focused on laying the foundation for fundamental technologies and finding ways to localize key equipment and tools connected with the techniques.

The United States and Japan agreed to jointly invest $4.5 billion for the deployment of 6G during their bilateral summit in April.

Many countries, including Japan and China, aim to commercialize the new network standard by 2030.

With a peak data rate of 1,000 gigabits or 1 terabyte per second, the 6G data download speed is approximately 50 times faster than 5G.

A notable advantage comes from higher coverage distance in terms of altitude of up to 10 kilometers (6 miles) from the ground compared to 5G’s range of 120 meters (394 feet), allowing for better network support for drones and other unmanned aerial vehicles.