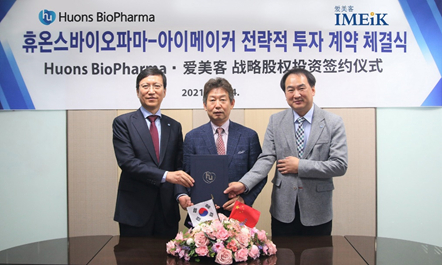 According to the Korean company on Thursday, the investment will go to subsidiary Huons BioPharma, which is in charge of selling its botulinum toxin product, Hutox, overseas. Also known as “botox,” the substance is widely used by beauty surgeons to reduce wrinkles.

Imeik Technology signed up as Huons BioPharma’s exclusive partner for Hutox in China in 2018. It is one of China’s largest players in the aesthetic industry and was listed on the Shenzhen stock exchange last year with a market cap currently standing at 26 trillion won.

As part of Thursday’s deal, Imeik Technology will become the second largest shareholder of Huons BioPharma with 25.4 percent. Huons Global, the group’s holding company unit, will remain the major stakeholder with 74.6 percent.

The stock purchase will need approval from Imeik Technology’s board of directors.

According to Huons Group, the deal is intended to strengthen the partnership between the two companies and expand Hutox’s market share in China, where the botulinum toxin market has an estimated size of 600 billion won.

Hutox is currently under preparation to launch Phase 3 clinical trials in China and has not yet launched sales.