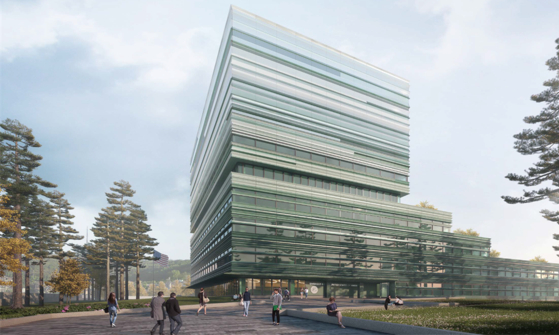 A rendering of what the new U.S. Embassy in Yongsan District, central Seoul, could look like. [SEOUL METROPOLITAN GOVERNMENT]

The relocation of the U.S. Embassy from Gwanghwamun to Yongsan got the green light from the Seoul city government.

“The urban planning committee of the city government approved the plan to move the U.S. Embassy in Korea to Yongsan District [in central Seoul],” the Seoul Metropolitan Government said in a statement Thursday.

“This area is located north of the Yongsan Park and is part of the area where Camp Coiner was. Based on the Korea-U.S. agreement in 2005 and follow-up agreements afterwards, this land belongs to the U.S. government.”

The city government’s announcement gives the green light to actually begin construction of the embassy. With its approval announced Thursday, the city government has changed the land from a green zone to an area where buildings can be built.

“We expect it to take another two years until construction begins,” the city government said in its statement.

Discussions on moving the embassy have been taking place between the governments of Korea and the United States since 2005, when the two agreed to move it from its current location in the Gwanghwamun Square area to where Camp Coiner, part of the U.S. military bases in Korea, stood at the time. The camp closed in 2017. 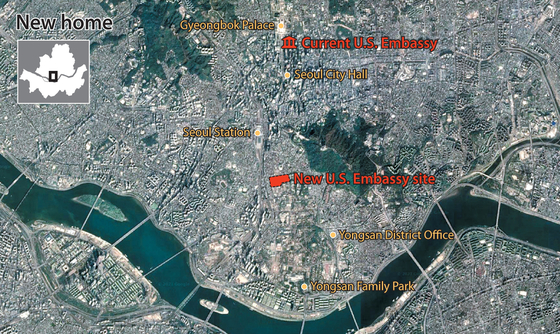 The U.S. Embassy held a tree-planting ceremony at the site in 2011 to herald construction of the new embassy.

The relocation was stalled another 10 years.

“We needed the Yongsan District Office to establish its land development plan in 2013, but for some reason, processes on the district-level were stalled,” said an official from the Seoul city government’s urban planning bureau.

“Then we needed an urban management plan regarding the area to be established by the city government, and it took another several years. It’s unusual for these plans to take this long, but in the case of the relocation of the U.S. Embassy, it did.”

William Coleman, spokesperson for the U.S. Embassy in Seoul, told the Korea JoongAng Daily that while two years is the current estimate as indicated by the city government, the embassy is "willing to move as fast as Seoul Metropolitan Government regulations and procedures allow.

"After zoning permission has been granted, the U.S. Government will begin to clear the site and prepare it for construction," he said.

Local media reports have pointed to delays in the relocation of U.S. military bases from Yongsan to Pyeongtaek, Gyeonggi, as another reason for the delay.

Korea and the United States agreed in May 2003 to relocate 80 U.S. army bases across the country to Pyeongtaek and Daegu. After years of negotiations, the U.S. Forces Korea and United Nations Command moved their headquarters to Camp Humphreys in Pyeongtaek on June 2018.

The areas of the Yongsan Garrison that have been returned from the United States to Korea will be turned into a park called the Yongsan Park, which is scheduled to open in 2027.

The building housing the U.S. Embassy in Gwanghwamun was built in 1961, with financial assistance from the United States. Its twin is the building next door used by the National Museum of Korean Contemporary History. The U.S. Embassy has been using its current building since 1968.

Korea’s Ministry of Foreign Affairs holds jurisdiction over the building. The ministry announced in 2013 its intention to use the building as a public diplomacy center after the U.S. Embassy relocates.