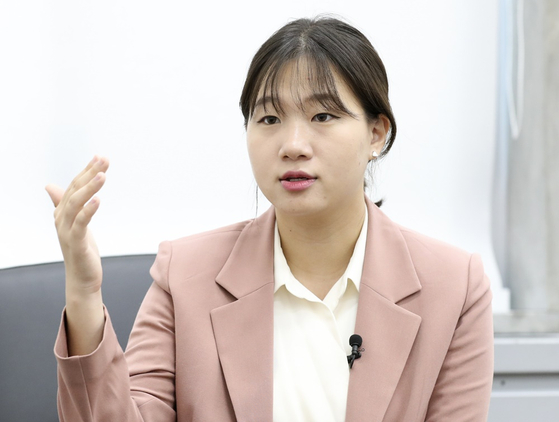 “It is an out-of-the-blue appointment irrelevant to me, with the administration choosing someone and appointing them to the Grade-1 public servant post that ordinary young people can never dream of — just because she is young,” said a post on the Facebook page representing the community of National Assembly workers, including lawmaker aides. Korea has a nine-grade system for career civil servants, with Grade-1 being the highest. Grade-1 is equivalent to an assistant-minister level.

The post was made Tuesday, one day after Moon named Park as the presidential secretary for youth affairs. The Blue House said Moon chose Park, who served in some key posts of the ruling Democratic Party (DP), to better communicate with the nation’s young.

Other posts also said they felt it unfair to see Park’s appointment to one of the top government posts despite her lack of experience. “If you have the right connections, you can be successful without much effort,” one post said.

“If the appointment was made based on an open application process, I would have not felt it was unfair,” another National Assembly worker posted.

While the Blue House insists that Park’s appointment has nothing to do with the opposition People Power Party (PPP)'s young new chairman, Lee Jun-seok, many compared the two. Young people also complained that Park’s appointment is unfair, while Lee’s victory seems more legitimate, since the 36-year-old politician competed against political heavyweights and won the chairmanship race. Lee also has 10 years of experience in the politics, they pointed out.

In a statement issued on Tuesday, a group of PPP lawmakers’ aides said Moon’s decision to recruit Park is a “comedy, not an attempt to break free from old-fashioned politics.” They said such an appointment will only anger the youngsters rather than win their support.

“Although Park served as a member of the DP’s Supreme Council, there was not a single policy or message that she had proposed for youth issues,” some pointed out. Park was named to the highest decision-making body of the DP in 2020 by then-Chairman Lee Nak-yon.

“I tell [those preparing for the civil servants exam] that they have to study 10 hours a day or else they should give up,” he said Wednesday in his video. “So my subscribers devoted 10 hours a day to become a Grade-9 public servant. But we now see someone who became a Grade-1 public servant, not Grade-9, at the age of [24].”

He said that one becomes just a Grade-5 public servant after passing a higher-level civil servants’ exam. “And after working 25 years, you become Grade-1, if you are lucky,” he said. “But she made it at the age of [24].”

Kang said he wants to invite Park to his show to share her know-how. “We really want to know how she passed the screening and interview, and how fierce the competition was, and how she overcame the slump,” he said, adding that she should appear in his show and share the information — since her job is working for the youngsters, after all.

“I cannot comment on that because the president made the decision,” An said. “Age can be a factor when we try to recruit the best person for a job. But it is inappropriate for me to comment on this appointment.”

Kim responded to An, saying, “It took you 28 years to become a Grade-1 public servant after you joined the government as the Grade-5 worker. Do you think Park’s case could be fair and just from the perspective of the young people?”

The ruling DP remained cautious about the growing complaints of the youngsters, but some of its politicians, such as Rep. Park Yong-jin, defended Moon’s decision, saying Park is qualified enough to work as the presidential secretary.

Despite the fairness issue, giving special opportunities to young politicians is crucial for a generational change, some experts said.

“There is always a practice of injecting fresh blood into politics,” Park Sung-min, a political consultant, said. “The country no longer has student activist groups, and it was necessary to intentionally offer opportunities to young politicians for them to accumulate political and administrative experiences. Chairman Lee is such an example.”