No more ‘orphans of history’

No more ‘orphans of history’ 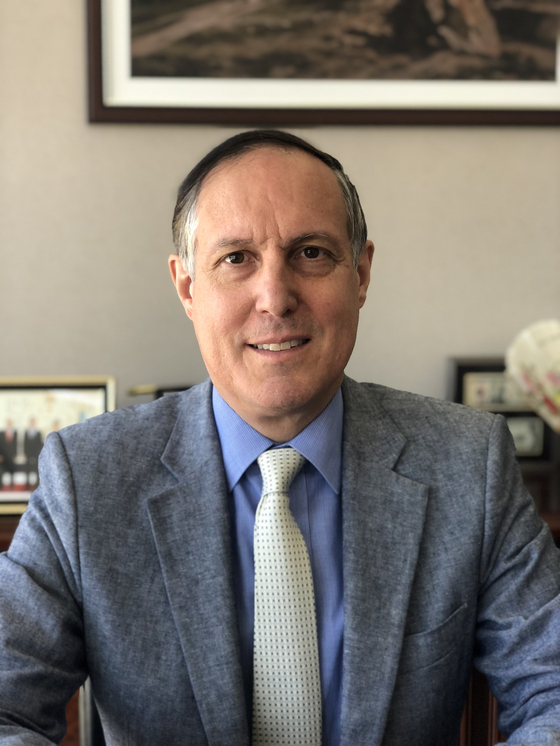 The author is Ambassador of Mexico in Korea.


In June 2020, as a contribution to the commemoration of the 70th anniversary of the beginning of the Korean War, the Ministry of Foreign Affairs of Korea invited me to give a lecture on the 100,000 soldiers of Mexican origin who fought in this conflict as part of the U.S. Armed Forces. In one year, the progress in our research on the topic has been impressive and has brought unexpected results. We did not imagine at the time the positive impact that it would have on some Mexican veterans and their families.

As a mirror of the impact the war had in the Mexican society, we discovered that three Mexican movies between 1951 and 1959 referred to the Korean War, from a tragic to a comic way. In one of them, “I Like Them Brave!” (1959) José comes back from the United States in his convertible Jeep and marries Chela, a strong ranchera from the countryside. He faces humiliation and is scorned by the men from the village because he does not show courage. In the climax of the film Chela explodes, reproaching him for his cowardice. José opens in front of her a small coffer of his property and spills out photographs, press clippings in English and medals. He responds to her that he was in the Korean War, that he was “a poor sergeant of Mexican origin who deserved the Congressional [United States] Medal for … his cowardice!” That was the fate of thousands of veterans of Mexican origin, in Mexico and the United States, because of prejudice, indifference and lack of understanding. Fortunately, that started to change. Historians, journalists, citizens and the governments of Mexico and Korea have started to look into the matter differently and have dug more relevant facts and information; there is no turning back. 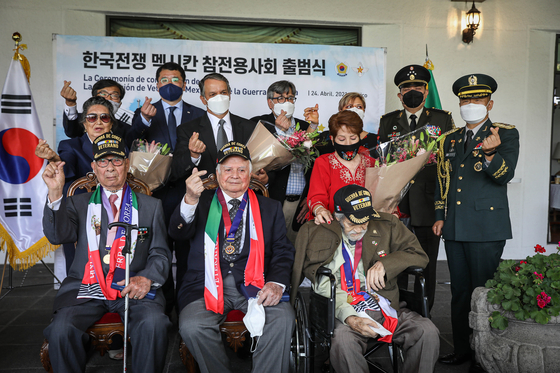 The launch ceremony of the Korean War Veterans Association in Mexico on April 24. [EMBASSY OF MEXICO]

I had the opportunity to meet the first President of the Association, José Villarreal, at his home near Mexico City, in January. He narrated some personal stories of the war and gave me a copy of his handwritten memoirs. When he arrived in Korea, he kept asking himself: “Where did I come to die?” From the United Nations coalition side, after Korean and American citizens, more Mexicans died than anybody else.

I have also been in close contact with veteran Roberto Sierra, since he is the father of a colleague Ambassador of Mexico, and who never before talked to his family about the atrocities he encountered during the war. He sheds tears while recounting the excruciating forty days he spent in a hole behind the enemy line. These conversations remind me of my father’s friend who was also a veteran of the war and whom I met when I was young. When he heard strong noises, he would cover his ears and freeze for minutes, due to post-traumatic stress disorder (PTSD). I think of him and of the thousands of other veterans of Mexican origin, convinced that it is never too late to recognize their trials and heroism.

Three veterans attended the establishment of the association, all above 90 years old: Roberto Sierra, José Villarreal and Alberto Fernández, while Jesús Cantú from Monterrey assisted remotely. The witnesses of honor were the Minister of National Defense of Mexico, General Luis Sandoval and the First Vice Minister of Foreign Affairs of the Republic of Korea, Choe Jong-kun. Family members of five deceased veterans also participated in this thoughtful event which brought the veterans together. It was a very moving moment, with abundance of tears from everyone.

In his congratulatory speech, the Mexican Defense Minister Sandoval told the veterans that “although many Mexicans who fought lost their lives, you as survivors have been able to tell that important part of history. […] You showed honor, courage, and daring, and the people of Mexico recognize your effort.” Through the ceremony these forgotten veterans ended their suffering in silence and could start healing their scars by sharing their experiences. The Korean Ministry of Patriots and Veterans Affairs has awarded these four Mexican veterans with the Apostle of Peace Medal.

The Embassy of Mexico in Korea and the Embassy of Korea in Mexico continue working together in finding more veterans alive or their families and in recognizing these anonymous heroes who contributed to the foundation of democracy in South Korea. We are seeking sponsorships in order to conduct in-depth historical research in Mexico, Korea and the United States on these soldiers. We are planning an exhibition to be held in Seoul in 2022, when we will commemorate the 60th Anniversary of the Establishment of Diplomatic Relations between both countries.

José Villarreal died in peace one week after the establishment of the association he briefly presided, on May 1, 2021. The Minister for Patriots and Veterans, Hwang Ki-chul, offered prayers for him, and said in a press release: “Following his wishes, we will make various efforts to help future generations remember the sacrifices and devotion of Mexicans who fought in the Korean War.” Villarreal was no more an “orphan of history.”

Ready for the rush