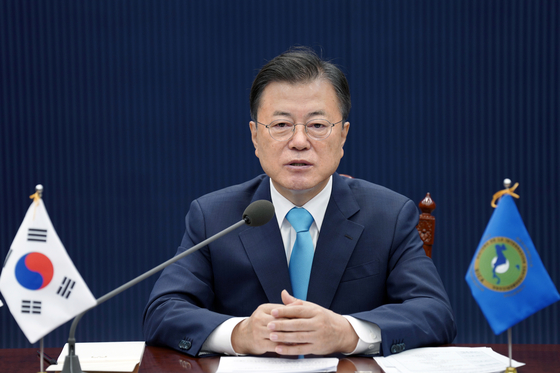 President Moon Jae-in met with leaders of the Central American Integration System (SICA) in a virtual summit Friday, the first summit between SICA and Korea in 11 years.

Moon and the leaders of SICA – Belize, Costa Rica, El Salvador, Guatemala, Honduras, Nicaragua, Panama and the Dominican Republic – highlighted recent Korea-SICA cooperation including the Central America-Korea FTA that came into effect in March, and discussed cooperation on renewable energy and Covid-19 recovery.

SICA was created in 1991 for regional cooperation on development. Altogether the group represents more than 45 million people and combined nominal GDPs of $360.6 billion.

“Korea and SICA share values and strategies,” said Costa Rican President Carlos Alvarado Quesada, according to the Blue House. “Korea is one of the most innovative nations in the world, and its innovative spirit is something that SICA wishes to adapt. We are all very glad to be working closely with Korea as its strategic partner.”

Korea has been a non-regional observer nation of SICA since 2012.

Last year it joined the Central American Bank for Economic Integration (Cabei) as a non-regional member. Starting Aug. 1, Korea will be a permanent board member of the bank, Korea's third permanent board membership in an international financial institute, following the Asian Development Bank and Asian Infrastructure Investment Bank.

Mentioning this, Moon said that Korea is looking forward to “further expanding inclusive and future-oriented cooperation” with SICA, adding that Korea will be sending teams of researchers and businesspeople to SICA in coming months to develop partnerships in agricultural, digital and green energy sectors.

The member states of SICA also welcomed Korea’s plans to donate Covid-19 vaccines to developing countries and $220 million to help address causes of migration from Central America’s Northern Triangle countries, or Guatemala, Honduras, and El Salvador, from 2021 to 2024 – as the Korean government announced at the Group of Seven summit earlier this month and the Korea-U.S. summit in May.

Next year marks the 60th anniversary of diplomatic ties between Korea and 15 nations of Central American region. They include seven SICA members, with Belize being the exception.

“As we look to celebrating the 60th anniversary next year, we are also hoping to sign the FTA with Korea,” said Guatemalan President Alejandro Eduardo Giammattei Falla, according to the Blue House.

The Central America-Korea FTA in effect from March is between Korea and Costa Rica, El Salvador, Panama, Honduras and Nicaragua.

“There are common grounds for cooperation between Korea and Central America, as we pursue renewable energies and transformation of the digital sector,” said Dominican President Luis Rodolfo Abinader Corona. “And that makes us good partners in reaching for sustainable developments into the future.”

Yoon Suk-yeol will attend NATO summit, a first for a Korean leader