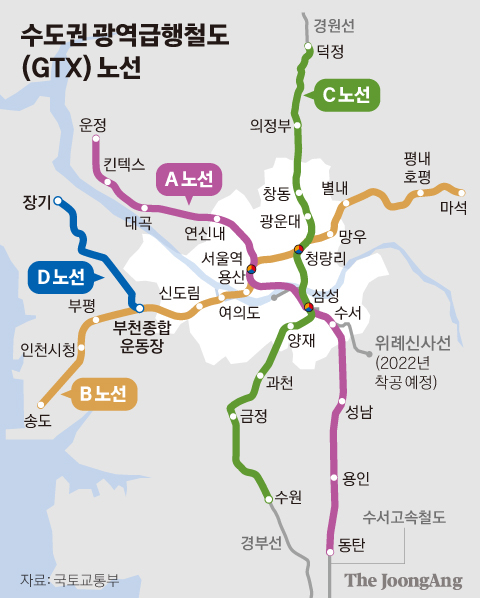 Seoul's city government has given up on the idea of a high-speed rail station in Gwanghwamun.

“We tried to open up a Great Train Express (GTX) station in Gwanghwamun to help commuters from out of town travel faster to the area during rush hour,” an official of the Seoul Metropolitan Government told the JoongAng Ilbo on Friday. "But it’s become difficult to try to pursue that plan now."

GTX lines are a new generation of high-speed railways that can reach a maximum speed of 180 kilometers per hour (112 miles per hour), and, in some cases, halve commuting times from parts of Gyeonggi to Seoul. There are four GTX lines being developed through the Gyeonggi and Seoul regions.

Seoul had intended to ask the Ministry of Land, Industry and Transport -- the authority on designing and building the lines -- to run one of the lines through Gwanghwamun Station.

In announcing a plan to renovate Gwanghwamun Square in 2019, former Mayor Park Won-soon proposed an underground transfer hub under the square, and promised that the city would try to have a new GTX station in Gwanghwamun.

The plan to create an underground transportation hub has since been scrapped, and, as of Friday, so has the Gwanghwamun GTX station.

“The GTX line that was to pass through Gwanghwamun is already too developed [to try to add Gwanghwamun to the line],” the city official told the JoongAng Ilbo.

That GTX line will run from Ilsan, Gyeonggi, through the central Seoul area to Hwaseong in Gyeonggi. It is scheduled to open in 2023, and will be the first GTX line to operate.

In recent communications with the land ministry, the city government has asked for new GTX lines to pass through Dongdaemun and Wangsimni stations in Seoul.

One of the lines being developed runs north-south from Yangju, Gyeonggi, through the areas of southern Seoul and to Suwon, Gyeonggi. The city government has asked that this line include Wangsimni Station.

Another line being developed runs east-west, from Namyangju, Gyeonggi, through central and western Seoul, to Songdo, Incheon. The city government has asked that this line include Dongdaemun Station.

It has also asked for another line, which is to run from Gimpo, Gyeonggi to Bucheon, Gyeonggi, to be extended east. The extended line, according to the city government, would cover areas of Gangdong District, eastern Seoul, and end in Hanam, Gyeonggi.


"We had some requests from residents of Gangdong District to have the GTX line pass through their area, so we have passed on their request to the ministry," the city official told the JoongAng Ilbo.

Rebirth of the square