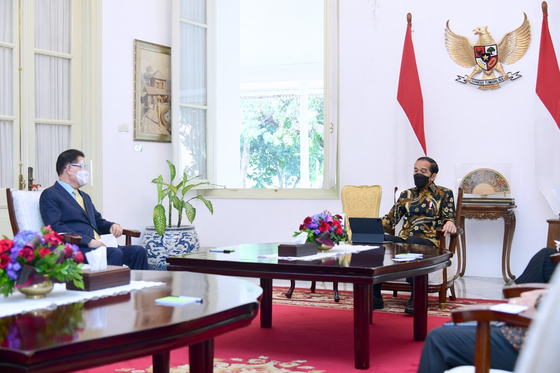 
Korea and Indonesia agreed Friday to closely cooperate to proceed smoothly with their joint KF-21 fighter jet development project, in a visit to Jakarta by Seoul’s top diplomat.

Korean Foreign Minister Chung Eui-yong held talks in Jakarta with his Indonesian counterpart, Retno Marsudi, stressing cooperation in the defense and health sectors and investment in a green economy in particular.

The two sides especially “agreed to closely cooperate to make sure that mutually beneficial, substantive cooperation projects like the KF-21/IF-X project will proceed smoothly,” said Seoul’s Foreign Ministry in a statement, noting that such bilateral cooperation in the defense sector is “symbolic of the special strategic partnership relationship between Korea and Indonesia.”

Indonesia is a stakeholder in the jet's development, dubbed the Korea Fighter Experimental (KF-X) project, having committed to finance 20 percent of its 8.8-trillion-won ($7.8 billion) development cost. The project is referred to as the IF-X program in Indonesia. The Southeast Asian country will eventually receive 50 out of a total 170 jets.

However, Indonesia stopped making payments after investing around 227.2 billion won, leading to speculation on whether the Southeast Asian country remains committed to the project.

Should the KF-21 successfully complete its test flights, Korea would become the eighth country in the world to develop a supersonic fighter jet. The first test flight is expected to take place next year.

Later that day, Chung paid a courtesy call on Indonesian President Joko Widodo at his presidential palace and said that the two countries' relations have been at their “best” in recent years and “based on deep trust and friendship,” according to the Foreign Ministry.

Chung likewise conveyed to Widodo that advancements in cooperation between the two countries in the defense sector is “based on deep trust between the two countries,” stressing that he hopes mutually beneficial projects such as the KF-21 joint fighter jet development program and Korean shipbuilder Daewoo Shipbuilding & Marine Engineering’s project to build a second submarine for the Indonesian Navy will be “successfully implemented.”

Korea is one of Indonesia’s “most important relationships,” Widodo told Chung, who added, “I am very satisfied with the investment from Korea, which I believe would be helpful to both countries.”

He noted that Indonesia has worked to improve its investment environment, including through the passing of the Omnibus Law last November, which eased some foreign investment restrictions.

Widodo especially conveyed his satisfaction with Korea's investment in the electric vehicle (EV) industry in Indonesia. He also noted Korea has also invested in the country’s pharmaceutical and biotechnology sectors.

Stressing the importance Indonesia places on cooperation in investment in green economy, he said, “In particular, I highly appreciate the expansion of investment by Korean companies to create an electric vehicle ecosystem.”

Chung in turn requested the Indonesian government to “continue to show interest and support the activities of Korean companies that have entered the country,” namely in the EV production and battery sectors.

Indonesia aims to become carbon-neutral by 2060 and plans to sell only electric vehicles for all new cars from 2050.

Indonesia holds around a quarter of the world’s nickel resources, an important component to produce lithium-ion batteries, and has eyes on becoming a global EV battery production hub.

Chung on Friday wrapped up the last leg of a five-day tour of three Southeast Asian countries that also took him to Vietnam and Singapore earlier in the week.

In Vietnam last Wednesday, Chung held talks with his Vietnamese counterpart Bui Thanh Son and discussed difficulties faced by Korean businesspeople because of Covid-19 restrictions and a four-week quarantine period.

Korea said it will provide Vietnam with $2.5 million worth of quarantine items this year to support its Covid-19 prevention efforts.

On Thursday, Chung met with his Singaporean counterpart Vivian Balakrishnan and agreed to work toward resuming "fast-track" entry systems for essential trips by businesspeople amid the Covid-19 pandemic and expand people-to-people exchanges, said Seoul’s Foreign Ministry.

This included discussions on travel bubbles and mutual recognition of certificates of vaccination, taking into account the vaccination rates of both countries.

The fast-track program for essential business travel was launched last September but suspended in February.

The Korean Foreign Ministry said the two sides appreciated the active participation of Korean companies in Singapore’s flagship infrastructure projects amid the pandemic and “agreed to further enhance cooperation in future industries, such as financial technology and start-ups.”

Singapore's Foreign Ministry said in a statement that the two ministers discussed ways to expand cooperation in new and emerging areas, such as fintech and the digital economy. It said they also agreed on the importance of restoring travel between the countries in a "gradual and safe" way.

KF-21 fighter jet defies doubters and takes to the skies