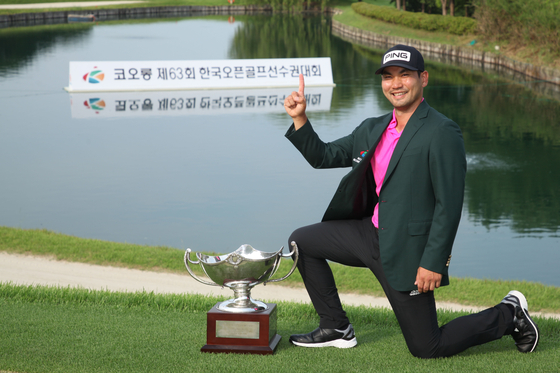 The national title was won only after a fierce three-man competition between Lee, Park Eun-shin and Kim Joo-hyung. Lee and Park were looking for their first-ever KPGA title whereas Kim came back from winning the SK telecom Open held from June 10 to June 13, looking for his third career win.

Lee was first, Kim second and Park third going into the final round, but the three found themselves tied for the lead in par-4, 14th.

But in the next par-4, 15th, Park managed to pull ahead by landing a birdie. In the par-3, 16th, Lee's shot landed on the apron, forcing him to bogey, whereas Park and Kim parred. Park stayed on top, Kim took second and Lee was pushed down to third.

Park's tee shot on the par-4, 17th flew far right, outside of the course, but luckily landed safe on the teeing ground of the 16th hole instead of falling into a hazard.

However, as his second shot flew to a mound left of the green, Park was forced to bogey whereas Lee slotted in a long putt, birdying the hole. Kim attempted to copy Lee's birdy putt, but Kim's putt slightly fell short and parred.

As the top three were back tied at first, the four-day, 72-hole stroke play match boiled down to the last hole.

The last tee shot seemed to have gotten to Kim's nerves, as Kim suddenly crashed out of the competition as his tee shot headed to the right and out of bounds. He had to redo his tee shot and play his second provisional ball.

Kim was no longer vying for the national title, but was rather trying to defend third place. Kim's fourth shot landed in the bunker, but he was able to bogey the last hole and stay at third.

The national title was now a match between Park and Lee. Park's third iron shot landed close to the hole but rolled back a little farther. Lee's ball followed the same course but stopped slightly closer to the hole.

Park missed his birdie putt, finishing the last par-5, 18th with a par. Park stood back to see if the match would go into a playoff, but Lee slotted his last birdie putt to win his first-ever KPGA championship with 8-under-par, 276.

The Kolon Korea Open had been held annually since 1958. As the 2020 edition was canceled due to the Covid-19 pandemic, Jazz Janewattananond of Thailand was the reigning champion of 2019.

In 2017 and 2018, the top two were eligible to compete in the Open Championship, the oldest and one of the most prestigious golf tournaments.

However, Lee will not be eligible to play at the Open Championship this July because the Open had to forgo last year's edition due to Covid-19 and has decided to give the players who were eligible last year a chance to compete this year. The top two of the Kolon Korea Open last year would have been eligible, but the Korea Open also missed out its 2020 edition because of the pandemic.

Despite his shortcomings, Lee shed tears of joy during his victory interview.

"It feels great to win after a long hiatus," Lee said in his interview.

"I really believed that the last putt would go in" Lee recalled when asked what was on his mind before his victory putt.

The KPGA Korean Tour will continue at the Woosung Construction Busan Gyeongnam Open at the Aramir Country Club in Changwon, North Gyeongsang held through July 8 to 11.