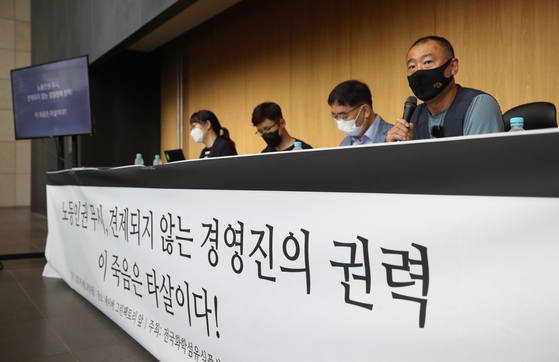 Naver's labor union announces the final results of a three-week investigation on the suicide of a developer last month, at the company's headquarters in Bundang, Gyeonggi, Monday. [YONHAP]

Naver's labor union called for heavier penalties for two senior executives involved in workplace bullying that led to the death of a developer last month.

Choi In-hyuk, who was one of the portal's founders, resigned as chief operating officer last week. According to the union, Choi ignored complaints from many people about an executive who allegedly bullied the Naver developer who committed suicide on May 25.

His final suicide note, e-mails and records on the corporate instant message service revealed that an executive abused him physically and verbally. The executive served as chief leader of the map development team, and was the direct superior of the deceased. That executive was fired.

Choi voluntarily resigned as COO out of "moral responsibility," Naver said Friday. He retained the position of CEO of Naver Financial, the portal company's fintech unit, and the Happybean Foundation, an online platform on which companies can raise donations.

The union said Choi was "deeply involved" in the recruiting and management of the executive in question.

In addition, "Choi remains in the top management of a core subsidiary," the union said in a Monday statement.

"He protected the executive in question, ignored the opinions of multiple managers who raised issues, dismissed some of them and later on promoted the executive to a higher position. Choi is equally at fault and does not deserve to stay at Naver at all."

On Monday, the union announced the results of a three-week investigation into the tragedy in which more than 60 people were interviewed.

It stressed that another senior executive abused the victim verbally and gave him too much work, despite being on a different team. This executive evaluated junior staff, designated their teams and decided on incentives including stock options. He was penalized but not removed.

The union called for Choi and the second executive to be fired.

"Our late colleague is remembered as a responsible employee who did not complain about any task he was assigned, even as his peers continuously raised issues about the senior executives that went ignored," the union said.

The union suggested the company set up a commission of union members and management to prevent workplace bullying and reduce the responsibilities of top managers like Choi.