More thunderstorms to be expected before official rainy season

More thunderstorms to be expected before official rainy season 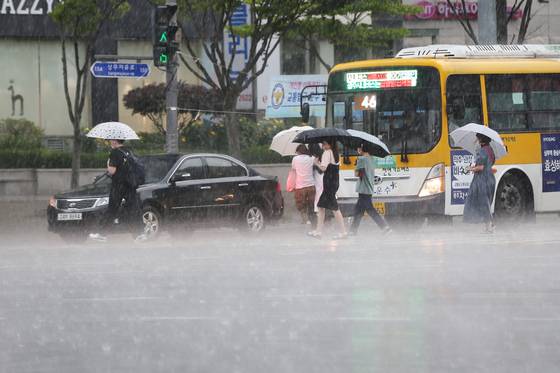 
Sudden and heavy thunderstorms should be expected throughout the country before the rainy season begins Friday, the national weather agency reported.

“Through Wednesday evening, many areas all over the nation will experience sudden showers, and some of these showers in the central regions of the country will be especially heavy,” said the Korea Meteorological Administration (KMA) in a report on Wednesday. “We expect some areas to see at least 30 millimeters [1.2 inches] of rain within a 15-minute time frame, and these showers can be accompanied by thunder and even hail. Construction sites and areas near streams and rivers should watch out for possible flooding.”

As of Wednesday afternoon, the KMA had issued heavy rain advisories in Seoul, Gyeonggi and some areas of Gangwon.

Humidity levels throughout the country were forecast to remain high through Friday, with daytime temperatures in Seoul, Incheon, Gyeonggi, Gangwon, Daejeon, Sejong, Chungcheong regions, Gwangju and Jeolla regions, Busan and Ulsan to peak at over 31 degrees Celsius (88 degrees Fahrenheit) through Friday, according to the KMA.

The humidity accompanied by sudden thunderstorms throughout the country have raised questions about whether Korea’s climate was turning tropical.

“It is expected that Korea’s climate will turn more tropical at the end of the century, if the current rate of climate change continues,” said Ahn Joong-bae, professor of atmospheric dynamic studies at Pusan National University. “Since the turn of the 21st century, Korea's southern regions have experienced subtropical weather patterns. By the end of the century, we expect Korea's central regions to experience tropical climates more regularly. But it is too early to say that the recent sudden thunderstorms throughout the country means Korea's entire climate has turned tropical.”

Ahn added that if the current rate of climate change continues, Korea, and other countries straddled across the middle latitudes, will experience heavier rainstorms and more severe droughts.

North Korea admitted it was experiencing one of its worst droughts in decades in 2019.

This summer, the rainy season is beginning later than usual.

Korea experienced its latest rainy season in 1982, when the season began on July 5.