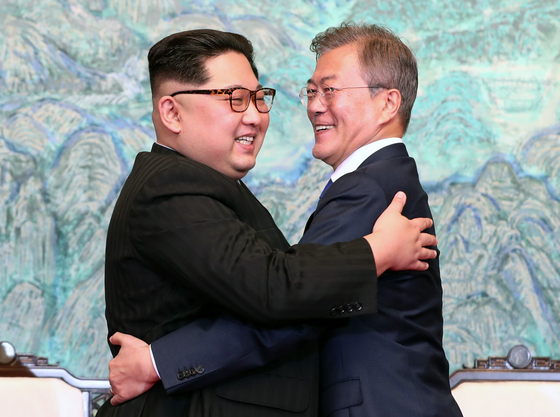 In this file photo, President Moon Jae-in, right, and North Korean leader Kim Jong-un hug each other after signing a joint declaration of their first summit at Panmunjom on April 27, 2018. [PRESIDENTIAL PRESS CORPS]

“The two leaders exchanged letters around the time of the Korea-U.S. summit on May 21,” the source said on the condition of anonymity in a phone interview with the JoongAng Ilbo. “I was told that they discussed a plan to have a virtual summit, such as a video conference. They exchanged letters more than once.” 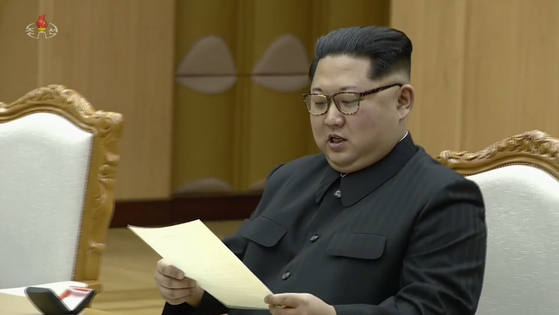 
Another source said Moon had sent a letter to Kim before his trip to Washington in May for the summit with U.S. President Joe Biden. “I have not heard what Kim’s answer was, but some information already spread not only in Korea but also in the diplomatic community in Washington that Moon and Kim had exchanged letters,” the source said.

One top government official said he won't confirm nor deny the exchange of letters between Moon and Kim. “It’s hard for me to confirm such information,” the official said. 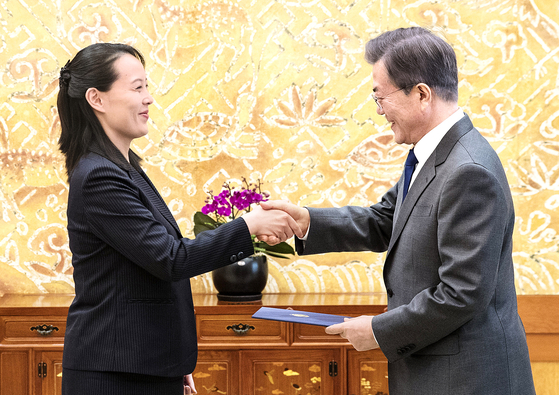 
In his New Year’s address on Jan. 11, Moon made his first proposal of virtual inter-Korean talks.

“The key driving force of the Korean Peninsula peace process is dialogue and mutually beneficial cooperation,” he said. “Our determination to meet at any time and any place and talk, even in a contact-free manner, remains unchanged."

In a press conference one week later, Moon repeated the offer, saying he is willing to engage in talks including a virtual summit.

Following Moon’s proposal, the Ministry of Unification built a video conference room and conducted a mock session in April. After the Biden administration set its North Korea policy, Moon sent letters to Kim in May.

“We also reaffirm our common belief that diplomacy and dialogue, based on previous inter-Korean and U.S.-[North Korea] commitments such as the 2018 Panmunjom Declaration and Singapore Joint Statement, are essential to achieve the complete denuclearization and establishment of permanent peace on the Korean Peninsula,” the joint statement issued after the Moon-Biden summit on May 21 said. “President Biden also expresses his support for inter-Korean dialogue, engagement and cooperation.” 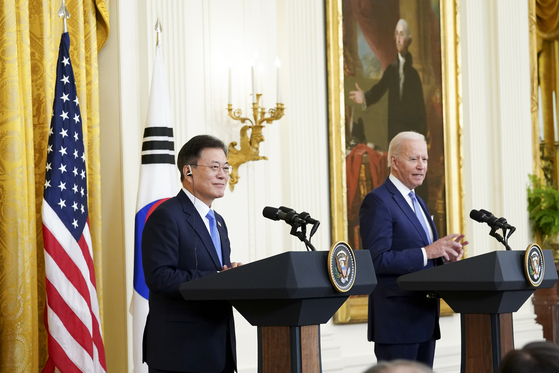 In this file photo, President Moon Jae-in, left, and U.S. President Joe Biden attend a joint press conference at the White House after their summit on May 22. [YONHAP]


While Kim’s response to Moon’s proposal remains unknown, diplomatic sources said Kim must not have shown immediate enthusiasm since no virtual summit has taken place.

“North Korea has shown mixed attitudes toward the United States and Korea in its recent statements,” said a diplomatic source. “It probably sent an ambiguous reply to Moon.

“For the North, canceling the Korea-U.S. joint military exercise scheduled for August is the top priority,” the source also said. “So it will be hard to flatly reject Moon’s proposal for talks.”

Experts also said the North is softening its direct criticism of Moon after the exchange of letters in May.

At the Workers’ Party’s Central Committee meeting on June 17, Kim said the country must “get prepared for both dialogue and confrontation” to ensure its dignity, interests and security. The Blue House welcomed his remarks, saying the message was to stress its intention for talks.

A Moon administration source said there is still no dramatic progress in North-U.S. relations or inter-Korean relations. “Despite the exchange of letters between the two leaders, the virtual summit has not taken place. It probably means that the North’s demand is far too excessive for us to accept.”