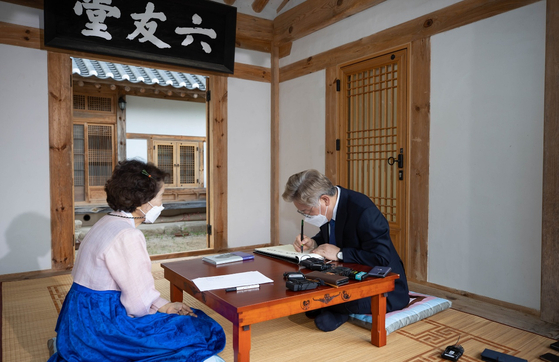 
The ruling Democratic Party’s presidential frontrunner, Gyeonggi Governor Lee Jae-myung, sparked controversy by calling the United States an “occupying force” during a visit to a museum dedicated to an independence activist on Thursday.

Lee, who officially announced his presidential bid last Thursday and currently leads polls by a large margin over eight other contenders from the ruling Democratic Party (DP), made the comments during a visit to the Yi Yuksa Literary Museum in Andong, North Gyeongsang. Yi was an independence activist and poet whose works employed anti-Japanese symbolism and metaphors.

“Pro-Japanese collaborators worked with U.S. occupying forces to maintain the same ruling structure [as the colonial period],” Lee said during his visit. “We did not establish a state with a clean start. We were unable to purify the country of its pro-Japanese remnants, and they remain to this day.”

“Lee’s historical perspective, which delegitimizes the founding of the Republic of Korea, is truly shocking,” said former conservative Bareun Party lawmaker Yoo Seung-min in a statement in response to Lee’s comments. “He is claiming that President Syngman Rhee — who was an independence activist — was a pro-Japanese collaborator and the United States, which shed blood to defend this country alongside our soldiers, was an occupying force.”

Conservative People Power Party (PPP) lawmaker Ha Tae-keung said that Lee “had no right to run as a presidential candidate” because “he denies the legitimacy of the republic.”

“The Republic of Korea was founded and defended not by the U.S. military government or pro-Japanese collaborators, but by the people and independence activists,” Ha added.

Lee’s camp responded to the criticism by arguing that Lee’s description of history was accurate.

“The comments in question were about what happened in Korea after liberation and before the August 15, 1948 founding of the government of the Republic of Korea,” Lee’s spokesman and DP lawmaker Park Seong-jun said.

Park also argued that the U.S. military at the time used the expression “occupying forces” to describe itself, and viewed the Korean Peninsula not as a victim of colonialism but as part of Japan, referencing a proclamation by General Douglas MacArthur to the Korean people issued on Sept. 7, 1945.

While the statement in question, titled, “Proclamation No. 1 by General of the Army Douglas MacArthur,” does indeed state that “the victorious military forces of [MacArthur’s] command will today occupy the territory of Korea south of 38 degrees north latitude,” it goes on to say that “in due course Korea shall become free and independent” and that “the Korean people are assured that the purpose of the occupation is to enforce the Instrument of Surrender and to protect them in their personal and religious rights.”

Korea’s history during the Japanese colonial occupation, and the subsequent post-war occupation of the country by U.S. and Soviet forces, has long been a lightning rod for political controversy, with some pundits arguing that the U.S. military occupation solidified the political division of the peninsula, while others say the U.S. presence preserved the southern half from communist expansion.

Former Prosecutor General Yoon Seok-youl, who is Lee’s chief rival in the presidential race, called the governor’s comments “intolerable” on Sunday and said he would fight against Lee’s position.

“I will ally with the international community to defend liberal democracy and its values with an iron-clad will and perception of history,” he said. "I will not let forces who attack our common sense put the people through any more pain."