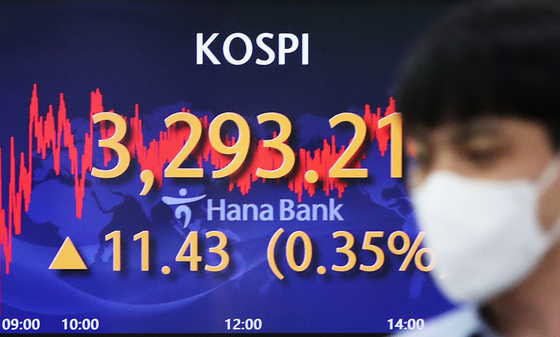 A screen in Hana Bank's trading room in central Seoul shows the Kospi closing at 3,293.21 points on Monday, up 11.43 points, or 0.35 percent, from the previous trading day. [YONHAP]


Stocks rebounded Monday after a two-day slump, largely on hopes for solid corporate earnings in the second quarter. The won rose against the dollar.

The bio-laden Kosdaq closed up 0.88 percent at 1,047.33 points, refreshing its 52-week high for the third consecutive session.

Trading volume was moderate at about 839 million shares worth around 14.3 trillion won ($12.6 billion), with losers outnumbering gainers 460 to 372.

Stocks got off to a solid start, led by strong advances in tech and bio shares.

Concerns about the recent spread of the new coronavirus and its variants drove up bio stocks.

Korea's daily new virus cases stayed in the 700s for the third day in a row Monday, prompting health authorities to warn against the spread of the highly contagious delta strain.

The local currency closed at 1,131.8 won against the dollar, down 3.2 won from the previous session's close.