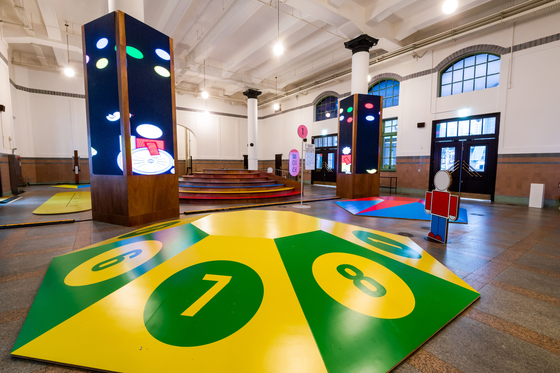 
The Ministry of Culture, Sports and Tourism and the Korea Craft & Design Foundation (KCDF) are hosting the "The Next of Public Design" exhibition at Culture Station Seoul 284 in Jung District, central Seoul, through Aug. 29.

The exhibition aims to highlight elements of public design, primarily in Seoul but also some examples from across the country. Public design is a field of design that aims to serve the general public, ranging from the design of street signs, park benches, subway stations to library buildings and much more. 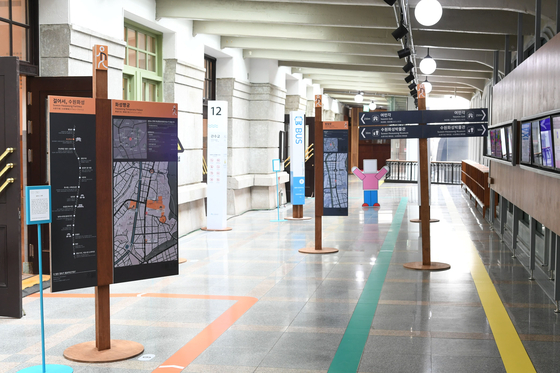 
"The really important things are so universal and commonplace that they’re hard to notice," said Professor Lee Hyun-sung of Hongik University's Graduate School of Industrial Art and the organizer of this exhibition, during a press conference on Wednesday.

One example is the interiors of Korea's subway stations which feature many visual signs and colors to help the people navigate their way easily. But the public sees such elements so frequently on a daily basis that they are not even aware that they are in the realm of design.

"But that familiarity and commonness are the values that public design needs to aim for," said Lee. 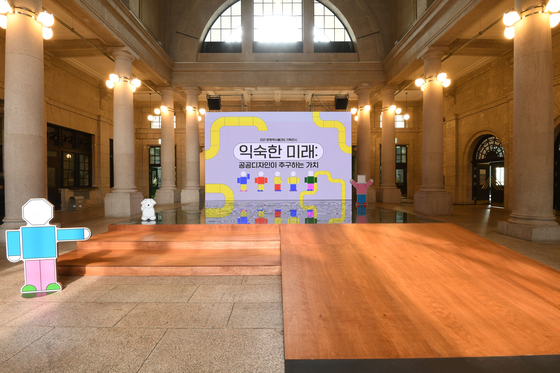 "The Next of Public Design" starts with a large screen that plays videos explaining the concept of public design in a simple way that visitors can easily understand. [CULTURE STATION SEOUL 284]


Throughout the two floors of the old train station-turned-museum, various examples of public design are on display.

The exhibition starts with a large screen that plays videos explaining the concept of public design in a simple way that visitors can easily understand.

In another video, a foreign resident who has been living in Korea for over 20 years walks through Seoul explaining elements of public design throughout the city and giving feedback. 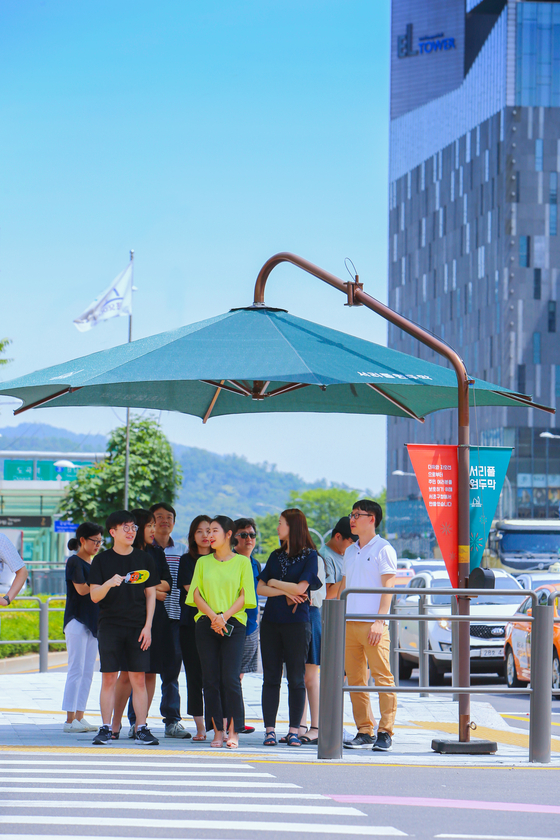 
Perhaps one of the most successful and widespread cases of public design is Korea's large parasols strategically installed at pedestrian crossings, where people have to stand and wait for a prolonged time in the blazing heat until the green light during summer. To minimize the risk of heatstroke, Seocho District created its own design for such parasols in 2015 when a heatwave struck.

Other districts of Seoul have been installing their own forms of parasols, but the Ministry of the Interior and Safety deemed Seocho District's design most sturdy and visually pleasing, designating it as the standardized form for the rest of the country. Now, more than 5,600 of these parasols have been installed all across the country. 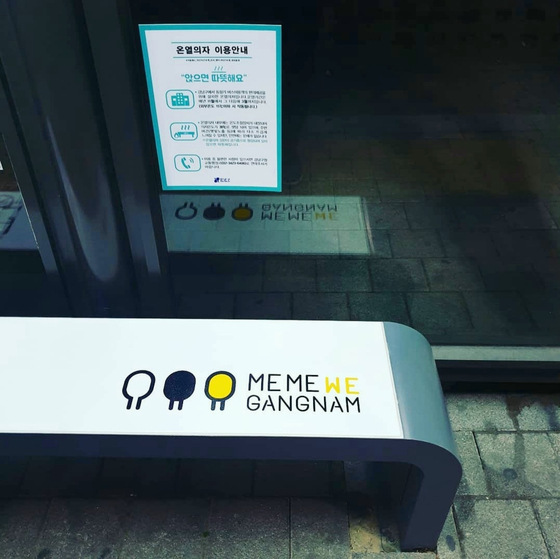 
During colder seasons, self-heating benches at bus stops can be a lifesaver for the public. Self-heating benches throughout the country maintain their surface temperature at 36 degrees Celcius (96.8 degrees Farenheit) so that people can wait for the bus in comfort during the harsh Korean winter. Each district's logo is added to the benches, contributing to the coherence of the district's aesthetics.

The exhibition emphasizes that public design is not always a top-to-bottom approach. An example is the "yellow carpet," a large triangular form painted in bright yellow next to crosswalks in Child Protection Zones near schools, so that it is easily visible to drivers and reminds them to slow down as children can walk out any moment. Yellow carpets were first designed by a private organization and then were adopted by the government to be painted throughout the country.

"Public design used to be determined by government offices in a one-direction process," said Lee. "But like the case of the yellow carpets, nowadays individuals and private organizations are also contributing. About half of the items on display at this exhibition were created by non-government entities." 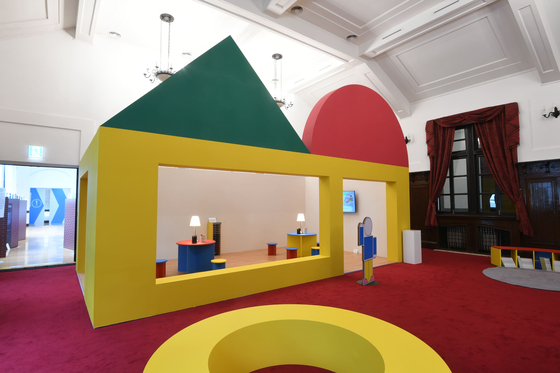 Other parts of the gallery are inspired by other public spaces such as schools, libraries, playgrounds, parks and subways. [CULTURE STATION SEOUL 284]


Other parts of the gallery are inspired by other public spaces such as schools, libraries, playgrounds, parks and subways.

One part is themed after the alleyways of a town located in Dongjak District to display various design elements for crime prevention such as placards warning that police are on patrol, emergency safety buttons and town maps to ensure the residents' safety. 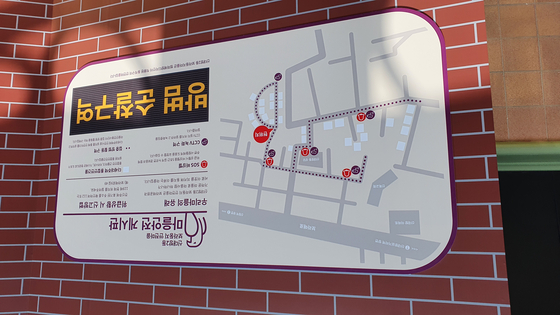 Public design elements aiming to prevent crime and give residents a sense of security. [HALEY YANG]


"A simple 'You are Here' map enhances a sense of security among residents, just by knowing where one currently is," explained Lee.

"The Next of Public Design" also attempts to highlight environmental issues.

"Donation Benches," which started in Jongno District in August of 2020, are benches made of upcycled material that citizens and corporations can sign up to donate in their names. Now other districts including Gangnam District have joined the campaign, which offers citizens a chance to contribute to the public and corporations a chance to promote themselves, while also giving the public a place to sit. 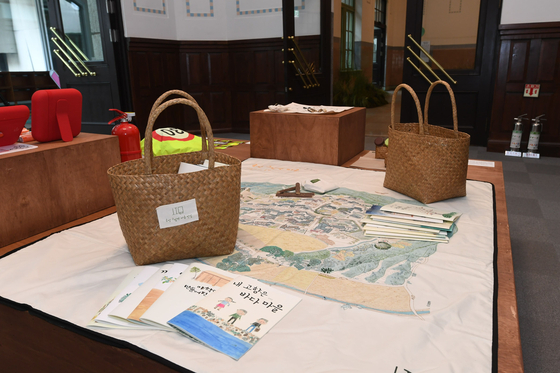 Craft items made with upcycled plastic and abandoned material such as fishnets. [CULTURE STATION SEOUL 284]


A whole room is dedicated to various items made of upcycled plastic and abandoned fishnets made into bags and pouches. Lee said that public design will also strive to incorporate recycling and eco-friendliness, and hopes that this exhibition becomes a catalyst for environmental organizations to participate in large-scale public design projects in the future.

"We hope that this exhibition spreads awareness about public design and that these successful cases of public design are spread throughout the country to become part of the people's lives," said President Kim Tae-hoon of the KCDF.