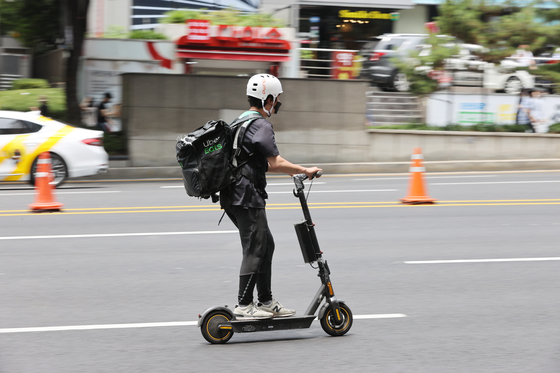 Food being delivered via e-scooter in Seoul. Food orders have surged as people continue to spend time at home due to Covid-19, contributing to online purchase breaking 16 trillion won for the first time in May. [YONHAP]

Online purchases in Korea topped 16 trillion won ($14 billon) for the first time, and mobile purchases are starting to catch up.

The record amount of online purchases was largely the result of people ordering takeout food, always a popular option in Korea and even moreso with social distancing measures brought on by the coronavirus pandemic.

According to Statistics Korea Tuesday, online purchases in May amounted to 16.06 trillion won, a 26 percent increase year-on-year.

The previous record for online purchases was 15.9 trillion won in March.

Spending on food delivery accounted for 13.3 percent of the total in May, or 2.1 trillion won, a 62.2 percent surge from a year earlier.

The second biggest category was groceries, 2.04 trillion won, or 12.7 percent of the total, which increased 38.1 percent from a year earlier.

Mobile purchases totaled 11.4 trillion won in May, up 31.6 percent compared to the same period last year.

Mobile purchases now account for 71.2 percent of online purchases, up from 68.1 percent a year ago.

Some 97.3 percent of food deliveries ordered online were booked by mobile apps, or 2.08 trillion won, which surged 69 percent over a year earlier.

Some 96 percent of groceries ordered online were booked by mobile apps, or 1.96 trillion won, which surged 39.7 percent over a year earlier.

Lee added that a greater variety of food available via mobile apps contributed to the surge, both delivered from restaurants and from online grocery services.

On May 24, the government began a program in which a person ordering food via a delivery app can get a 10,000 won refund after four purchases.

The aim was to boost consumer spending in the wake of the pandemic.

However, the refund program ended on July 4 -- after only 42 days -- when its 26 billion won budget ran out.