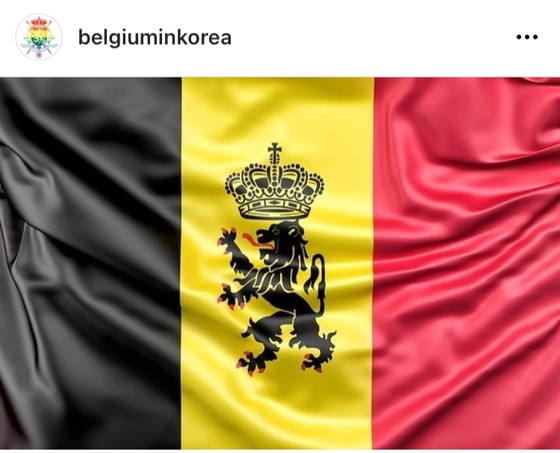 Screen capture of an Instagram posting by the Belgian Embassy in Seoul. [BELGIAN EMBASSY IN KOREA]

The wife of the ambassador of Belgium to Korea, who was investigated for slapping an employee at a clothing store in April, slapped a park manager on Monday, according to the police.

Xiang Xueqiu was sitting on a bench in Dokseodang Park in Yongsan District, central Seoul, around 9:25 a.m. Monday when a 65-year-old manager of the park was cleaning up with a broom.

The broom allegedly touched Xiang, at which point she got up and yelled at the manager, according to the manager.

“I was cleaning the park after the rain, when I heard her shouting at me,” the manager told the Kyunghyang Shinmun, a local news outlet, on Tuesday.

“I didn’t understand what she was saying exactly, but she kicked my lunch box, and stepped on it. Then she said that my broom touched her. I didn’t even know that it did.”

The manager added that he is not a street cleaner, as has been reported by local media outlets.

The two got into a brawl, according to the police. The manager called the police but the case was closed after both he and Xiang said they don’t want to make criminal complaints.

The man told Kyunghyang that after they got in a brawl, Xiang fell on the ground. He tried to help her get up, and that’s when she slapped him, he said.

Xiang was investigated by police after she allegedly slapped a clothing store manager in Yongsan District, and hit another employee on the back of her head on April 9. That altercation began after the employee asked Xiang if the blazer she was wearing, which was from the shop, had been paid for. It had been, and the employee apologized for implying that she had shoplifted it. Xiang left the store but came back shortly after, and allegedly assaulted the employee and the store manager.

The Belgian Foreign Ministry announced in late May that it waived Xiang's diplomatic immunity, adding that Xiang couldn't submit to police investigation immediately due to suffering a stroke a week after the incident.

Belgian Ambassador to Korea Peter Lescouhier formally apologized on behalf of his wife in a press release on April 22. The Belgian Foreign Ministry announced in May that they decided to curtail Lescouhier’s term “for the best interest of bilateral relations” and end his tenure this summer. This year marks the 120th anniversary of diplomatic ties between Belgium and Korea.

It has been reported that Ambassador Lescouhier and Xiang are scheduled to leave Korea this month.

The Belgian Embassy in Seoul could not be reached as of press time Tuesday.