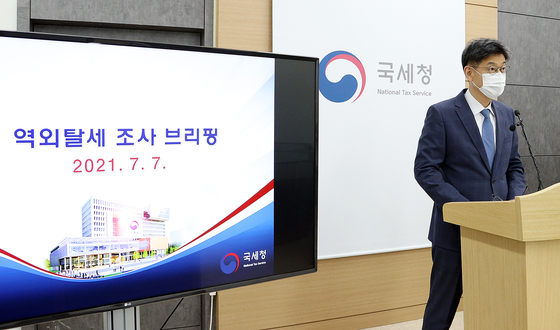 
A Korean businessman had a good thing going selling cosmetics and other merchandises on overseas online markets.

Customers overseas paid for their purchases with such systems as Alipay and Paypal. The money went to a temporary offshore account in the name of the businessman's son. When needed, the son wired money back to his parents’ account in Korea.

This businessman was busted by tax authorities for deliberately trying to hide his income -- and avoid paying tax.

This is one of a growing number of cases tax authorities have found of alleged offshore tax evasion.

The National Tax Service on Wednesday said it is currently auditing 46 such cases. Common elements in the cases include digital technologies and accounts in countries known for financial secrecy such as Switzerland.

Among those currently being audited, 14 are suspected of having “black money” hidden in offshore accounts, or of intentionally not declaring offshore incomes.

Additionally, 13 are suspected of using fintech -- financial technology such as mobile payments -- to avoid having their incomes traced while 19, including an unnamed multinational company, allegedly dodged taxes by overstating royalty payments or expenses paid to their foreign headquarters.

One of the cases being audited involves a plastic surgeon who allegedly took payments from foreign patients via overseas payment systems like Alipay and Paypal.

“There has been an increase in the number of tax evasion cases using e-commerce payment systems, which makes it difficult to track incomes,” said Kim Dong-il, an NTS official.

Kim noted that online payments are now common not only for online shopping but for a variety of businesses including hospitals and restaurant.

One case the NTS is looking into involves a secret account in Switzerland.

According to the NTS, the person being audited has accounts in Switzerland opened under code names that were a combination of numbers and letters, such as “13579bomb” or “12345bluediamond,” used to obscure the identity of the actual owner.

In the past, it wasn’t easy for tax authorities to track down accounts in places known for banking privacy, such as Switzerland, Singapore and Hong Kong.

Tax authority had to first prove the identity of an account holder, which required the cooperation of a court.

The NTS said it is now better able to track actual owners of such accounts after collecting financial information through international agreements made with tax authorities in 151 countries.

The NTS said since 2019 it has audited 372 suspected of offshore tax evasion. So far it was able to collect 1.45 trillion won of unpaid taxes.

The last audit was in March, in which 54 people were investigated.