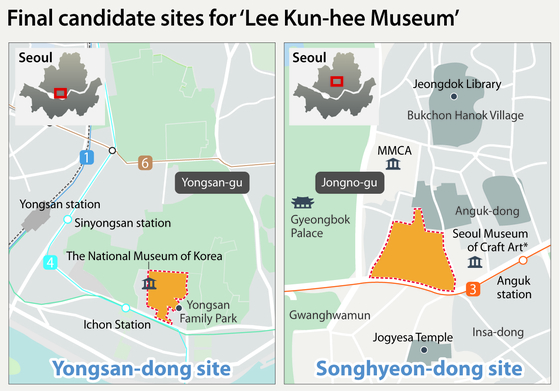 
A new national museum to house late Samsung Group Chairman Lee Kun-hee’s vast art collection donated to the nation will be established in central Seoul — at either a Songhyeon-dong site near the National Museum of Modern and Contemporary Art (MMCA) or a Yongsan-dong site next to the National Museum of Korea, the government said on Wednesday, bringing an end to the overheated race of local governments to have the so-called “Lee Kun-hee Museum” in their regions.

“A committee [of government officials and outside experts formed to deal with the donated Lee collection] will select one of the two candidate sites probably within this year,” Hwang Hee, Minister of Culture, Sports and Tourism, said in a press briefing at the government complex in central Seoul. “The museum will be set up in 2027 or 2028 after research, database construction and the registration of the donated artifacts and artworks,” added Min Byoung-chan, director general of the National Museum of Korea, who is on the committee.

The family of the late Lee donated more than 23,000 pieces including National Treasures and famous modern art masters’ works from his extensive art collection to the two national museums and some municipal museums in the provinces on April 28.

Since then, more than 30 local governments expressed hopes that their region would become the home of the “Lee Kun-hee Museum.” They cited their relationships with the late Lee and the new museum’s possible economic and cultural effect, while complaining about a big disparity in cultural facilities between Seoul and cities outside the capital.

After the Culture Ministry’s briefing on Wednesday, Busan Mayor Park Heong-joon, who had triggered the race between local governments, protested the decision, writing on his Facebook account that it is a “unilateral decision” by the bureaucracy “imbued with Seoul-centric ideas.”

“In dealing with the donated Lee Kun-hee collection, we attach the greatest importance to its preservation and research,” Kim Young-na, the renowned art historian and head of the committee, said during the Culture Ministry’s briefing. “The donated artifacts include more than 10,000 books and documents, whose study will require the professional workforce from not only the National Museum of Korea but also the National Library and others. Therefore, for the sake of smooth collaboration between institutions in research, the collection needs to be in Seoul.”

“In addition, considering accessibility for the general public, it is better for the collection to be in the center of the city,“ she added. 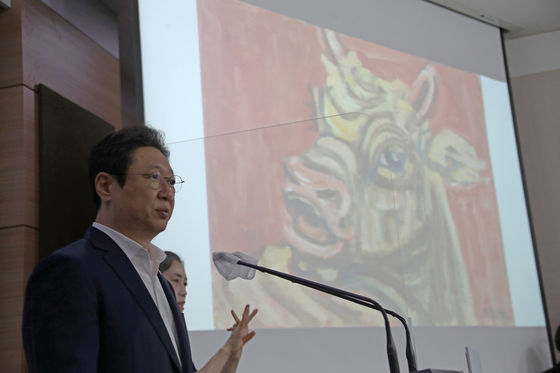 Culture Minister Hwang Hee announces that a new museum to house the donated Lee Kun-hee collection will be set up in central Seoul, in a press briefing at the government complex in Seoul. [YONHAP]


“The committee set four principles to consider,” Culture Minister Hwang said. “First, the donor and his intention for the collection should be respected. Second, there should be a creative approach to the research and exhibition of the donated works that are from various periods of history. Third, smooth collaborations between existing museums should be made for the collection’s research and exhibition. Fourth, there should be the effect of boosting cultural tourism and the national brand.”

“Based on these principles, the committee concluded that a new museum which carries ‘Lee Kun-hee’ in its name in honor of the donor should be set up at either the Songhyeon-dong site owned by Seoul city or the Yongsan-dong site owned by the Culture Ministry,” Hwang continued.

“We understand the thoughts of the local governments. We will help increase state-run cultural facilities in the provinces and will hold regular exhibitions of the Lee Kun-hee collection outside the capital area.”

Contrary to local governments, many insiders in the Korean art world have been skeptical about the necessity of a new museum, because Lee’s family had already distributed the donated works according to their characteristics and contexts, sending 21,693 pieces of old art and artifacts to the National Museum of Korea and 1,488 pieces of modern art to the MMCA.

Regarding concerns about housing old artifacts and modern art pieces together without context, MMCA director Youn Bummo said, “It will provide opportunities to show the collector’s philosophy as it is and to create a new paradigm of researching and exhibiting old and modern art together.”

Meanwhile, amid the high public interest, the National Museum of Korea and MMCA’s Seoul branch will start special exhibitions of the donated Lee-Kun-hee collection simultaneously on July 21.