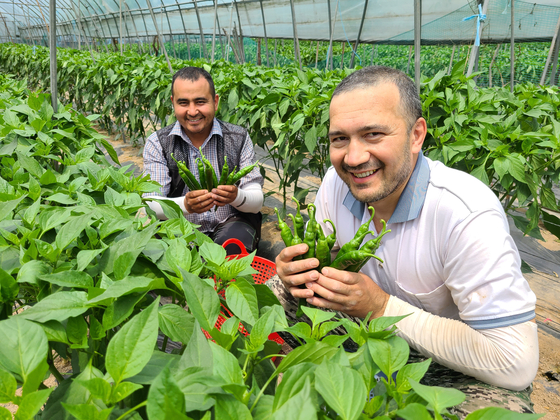 
Counties in rural Korea are welcoming back migrant workers from abroad, who couldn't come to work during the year-long pandemic.

"I haven't been able to work for a while because of the coronavirus, but I'm happy to come back and work in Korea after a long time,” Akrom, a 36-year-old migrant worker from Uzbekistan, said. "I have five family members living in my hometown, two sons, two daughters and my wife, and I'm glad to be able to send 1.3 million won [$1,149] a month."

Akrom used to buy used cars and home electronics from Korea and ship them to Uzbekistan. Then, the coronavirus came.

"Until the beginning of this year, I had lots of worries because I didn’t have any helping hands, but I’m a bit relieved as migrant seasonal workers came in,” he said. “I won’t have to find workers at least until October.”

“We will help to provide workers quickly in towns and counties that are short-handed during the farming season,” Cho In-mook, governor of Yanggu County said.

Yeongyang County in North Gyeongsang, where seasonal workers from Uzbek were also deployed, are busy farming chili, cabbage and herbs.

After spending two weeks in quarantine, the seasonal workers arrived in Yeongyang County on June 24. A total of 112 people were placed on 42 farms.

“We will provide all support for seasonal workers from Uzbekistan to adapt in the region,” said Oh Do-chang, governor of Yeongyang County.

However, seasonal workers are just a dream for many other farm villages.

Workers from Southeast Asian countries are being blocked due to the pandemic.

This year, all 422 workers came from Uzbekistan.

The Uzbekistan government has worked hard to send manpower overseas this year, including to Korea.

Goesan County in North Chungcheong recently signed an agreement with the Uzbekistan Labor Ministry’s office in Korea and will welcome 75 seasonal workers this month.

They will be sent to villages in Goesan County for corn harvesting and pickled cabbage production for five months. An additional 114 people will be sent to work in Inje County, and 88 more in Hongcheon County.

Experts say the government should find ways to resolve the chronic labor shortage.

"Foreign seasonal workers can only work at farms under contract, but there are not many farms that have work every day," said Kim Jeong-Seop, a senior researcher at the Korea Rural Economic Institute.

"The country will be able to use the workforce more efficiently [...] if the workers are contracted by corporations rather than individual farms."