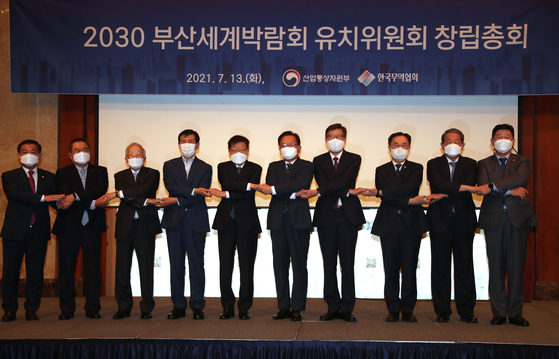 Prime Minister Kim Boo-kyum, fifth from right, and the new head of the Busan Expo bid committee Kim Young-ju, fifth from left, and other attendees pose during a ceremony introducing the non-profit committee at Lotte Hotel in Seoul on Tuesday. [YONHAP]


To support Busan’s bid for the 2030 World Expo, a non-profit committee has been formed by the government.

Leaders of the five largest chaebol were appointed vice chairs.

The Ministry of Trade, Industry and Energy on Tuesday held a ceremony celebrating the formation of the committee at the Lotte Hotel in downtown Seoul. It was attended by Prime Minister Kim Boo-kyum and Minister Moon Sung-wook.

The committee will be led by former Korea International Trade Association Chairman Kim Young-ju, while Samsung, Hyundai Motor, SK, LG and Lotte will assist in the bid.

The committee is charged with promoting Busan to 169 participating countries.

At the event, prime minister Kim stressed that the cooperation of the five groups has established a new model for attracting major international events.

While major businesses assisted the country the in winning bids for international events in the past, including the Pyeongchang Winter Olympics, this is the first time the five largest chaebol will be working together in a coordinated fashion in support of a bid.

If Busan hosts the Expo, it would be the third Asian country to do so.

Japan will be again hosting the World Expo in 2025 in Osaka.

In April, Moscow also submitted an application to host the 2030 event.

“I feel a heavy responsibility for taking on a difficult but important project of winning the bid for the World Expo,” said committee head Kim. “We will do our best in winning the World Expo bid by utilizing the overseas networks of the five chaebol and the government’s diplomatic capacity.”

Busan's not-so-smooth bid to convince BTS to be ambassador