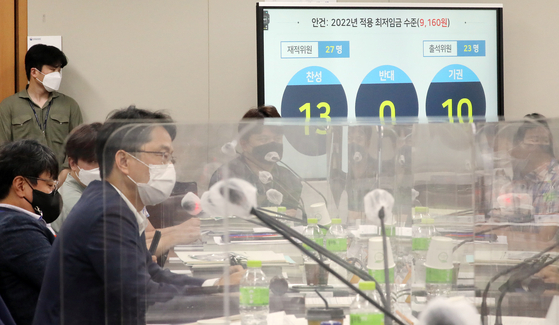 Park Joon-shik, head of the Minimum Wage Commission, answers questions about next year's minimum wage at the government complex in Sejong on Tuesday. [YONHAP]


The minimum wage for next year was set at 9,160 won ($7.98) per hour, up 5.1 percent from this year’s -- over objections by representatives of both labor and business.

It was the last minimum wage to be determined by the Moon Jae-in government.

Shortly after midnight on Tuesday, the Minimum Wage Committee called for a vote on the 9,160 won minimum wage, which was proposed by government representatives.

Labor representatives argued that the minimum wage should be raised to over 10,000 won. Businesses representatives proposed keeping it under 9,000 won, noting the difficulties facing small businesses including coffee shops and restaurants during the pandemic.

“When the final meeting started the government representative proposed a range between 9,030 and 9,300 won for the two sides to negotiate,” said Park Hee-eun, vice head of the Korean Confederation of Trade Unions, whose representatives walked out.

The Korean Confederation of Trade Unions said it will hold a strike over the minimum wage issue.

Representatives of business said the increase agreed to will be too hard on small shop owners.

“We can’t hide our shock that they ignored the reality that small shop owners and SMEs are at the edge of the cliff [due to Covid-19],” said Ryu Ki-jung, representative of the Korea Employers Federation.

Under the current government, the minimum wage has risen 41.6 percent although it did not break 10,000 won, as promised by Moon at the start of his term in 2017.

The Moon government championed income-led growth, an economic philosophy that said increasing wages would contribute to sustainable economic growth through the expansion of the domestic market through more consumer spending.

That philosophy was meant to provide a new basis for the Korean economy, which is heavily reliant on exports.

Businesses complained and many jobs were lost, forcing Moon's government to ease up. The minimum wage for 2020 grew only 2.9 percent, and this year it was raised 1.5 percent, a record low, due to Covid-19.

A final decision will be announced by the Labor Minister on Aug. 3, which gives a brief window for all sides to request a reconsideration.

Finance Minister Hong Nam-ki stressed that the minimum wage for next year was decided in consideration of both small businesses and low-paid workers.

“While the economy recently is recovering, the Minimum Wage Committee seemed to have made its decisions based on comprehensive consideration of the situation including the limited ability of small SMEs and small stores to pay [employees] as the Covid-19 situation prolongs and the struggles of low-paid workers,” Hong said on Facebook.

He stressed the need for cooperation from both labor and companies.

“Labor and business are the two wheels that lead our economy,” Hong said. “As the Covid-19 crisis goes on, the difficulty that labor and businesses have increases and the arguments from both sides have never been more apart.

“Until yesterday both sides have been facing each other [in conflict] but starting today both have to work together as a team to lead the economy.”

According to the Labor Ministry on Wednesday, if a worker commits to 40 hours of work a week, the monthly income from the minimum wage amounts to 1.91 million won, including weekend and holiday work. The annual wage amounts to nearly 23 million won.