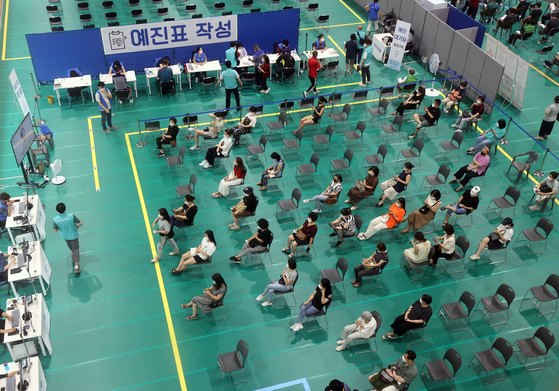 People wait to get vaccinated at a center in Eunpyeong District, northern Seoul on Monday morning. Health authorities said they will resume reservation for the Moderna vaccine for people between the ages of 55 and 59 later in the day. [YONHAP] 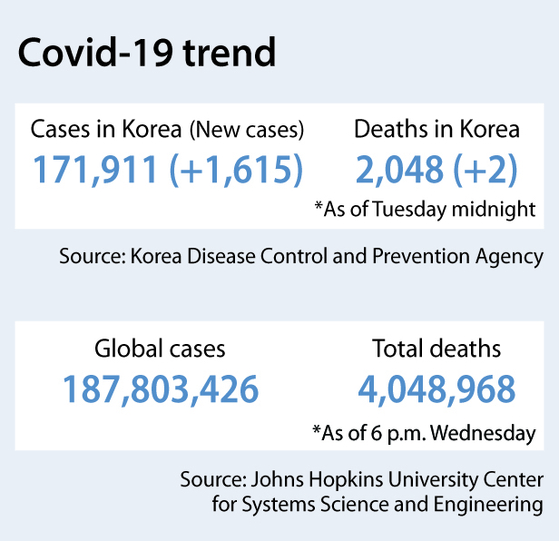 The country confirmed 1,615 cases on Wednesday, including 1,568 local infections, raising the total caseload to 171,911, according to the Korea Disease Control and Prevention Agency (KDCA).

There were two additional virus deaths, raising the death toll to 2,048.

The previous record for daily new infections was last Saturday's 1,378.


Jeong Eun-kyeong, commissioner of the KDCA, said in a briefing last Thursday that daily new infections “could stand at 1,400 in late July should the current state be sustained,” and could even "reach some 2,140” if the situation worsens. She based those estimates on mathematical modeling by experts.

In just six days, the number of infections exceeded experts' prediction for the end of July.

Of Wednesday's local infections, 1,179 cases, or 75.2 percent, were in the greater Seoul area — 633 coming from Seoul, 453 from Gyeonggi and 93 from Incheon. It was the first time daily cases from Seoul and its neighboring areas topped 1,100.

As the country is engulfed by a fourth wave of mass infections, patients reported outside of greater Seoul rose to 389 cases, 24.8 percent of the total.

The number of confirmed cases in non-capital areas had remained below 200, but recently spiked above 300 and are now nearing the 400 mark.

With new infections spreading to other regions, all non-capital areas — except for Sejong, North Jeolla, South Jeolla and North Gyeongsang — raised their social distancing levels a notch to Level 2. The tougher public health measures will go into effect Thursday.

"The average number of daily new cases has more than doubled from last week,” Prime Minister Kim Boo-kyum said in a Covid-19 response meeting on Wednesday.

“Strengthened distancing measures will also be implemented by region, such as limiting the number of private gatherings and business hours,” Kim said.

Under Level 2, up to eight people are allowed in private gatherings, and restaurants, cafes, bars and clubs will be allowed to stay open until midnight.

However, Sejong, Daejeon and North Chungcheong will only allow up to four people to gather, while Ulsan and Jeju set the limit at six.

The provinces of North Jeolla, South Jeolla and North Gyeongsang maintained Level 1 measures but limited the number of people in gatherings to eight.

All bars and clubs that allow dancing in Daejeon and Ulsan will have to close at 11 p.m., while those in Jeju have to shut down completely.

In addition, vaccine incentives exempting partially or fully inoculated people from limits on gatherings will be suspended in Sejong, Busan, Gangwon and Jeju. 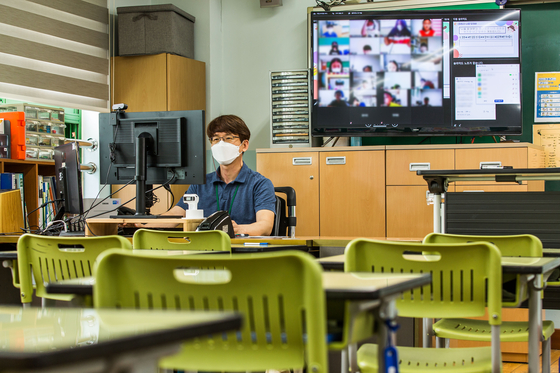 A teacher gives an online class at Muhak Elementary School in northern Seoul on Monday, as all schools in the greater Seoul area switched to online classes due to record-breaking coronavirus infections. Kids will be kept out of classrooms at least through July 25 in Seoul, Gyeonggi and Incheon. [NEWS1]


The greater Seoul area, home to around half the country’s population, has been placed under the strictest Level 4 guidelines since Monday.

Gatherings of more than two people are banned after 6 p.m, and, starting today, all schools in the greater Seoul area will switch to online classes for the rest of the semester. Hagwon (cram schools) can hold classes until 10 p.m.

Meanwhile, the reservation system to book Moderna Covid-19 vaccine, which was temporarily halted for some 3.52 million people between the ages of 55 and 59, was to resume Wednesday at 8 p.m.

The country started taking reservations from people between 55 and 59 on Monday, who were scheduled for inoculation from July 26 through Aug. 7.

However, the reservation system was so overloaded it crashed as soon as it opened, and was abruptly closed in 15 hours.

"We started taking reservations first for the shots with fixed shipment schedules [...] while the deliveries for the last week of July were still uncertain," Jeong said.

Authorities stressed that Korea has arranged enough Moderna vaccines and there is no shortage.

“The amount of Moderna vaccines coming in July, August and September is more than enough to vaccinate all people in their 50s,” Park Hye-kyung, an official from the Covid-19 Vaccination Task Force said.

Reservations for people between the ages of 55 and 59 resumed Wednesday night, and the inoculation schedule was stretched to Aug. 25.

The inoculation period for people between the ages of 50 and 54, who are also eligible for Moderna shots, was delayed one week from Aug. 9 to 21 to Aug. 16 to 25.

In order to keep the website from crashing, the government will take reservations from people on a staggered schedule.

People under 50, who will get their vaccines in mid- or late August, are most likely to receive the Pfizer vaccine, the KDCA said.

"Since Pfizer shots will be arriving from late July to August, we’re planning to inoculate mainly with Pfizer," said Park, "along with Moderna.”