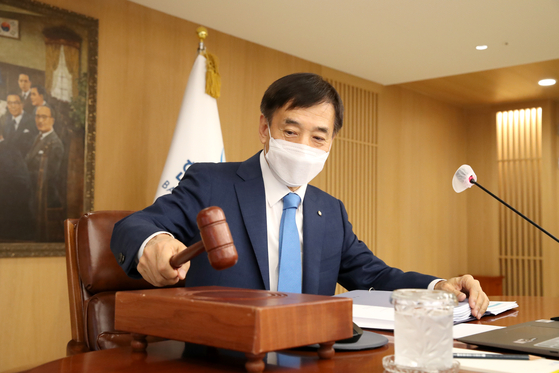 Bank of Korea Gov. Lee Ju-yeol on Thursday confirm the decision by the bank's monetary policy board to hold the benchmark rate at a record low 0.5 percent. [BANK OF KOREA]


One member of the Bank of Korea’s seven-member monetary policy board dissented at the rate-setting meeting Thursday, arguing that the base rate should be taken from the historic low 0.5 percent to 0.75 percent.

In the eight meetings since the board lowered the rate to 0.5 percent in May last year, the board agreed unanimously to maintain the rate. The July meeting was the ninth meeting in which the board voted to hold the rate steady and the first in which there was any sign of disagreement.

The dissent is just one of a number of signs that the Korean central bank is becoming increasingly hawkish, somewhat out of line with the dovish U.S. Federal Reserve.

Gov. Lee Ju-yeol said the board will be discussing a gradual end to accommodative monetary policy from the next meeting, which will be held in August, during an online press briefing held Thursday after the rate announcement.

“Most members of the monetary policy board agreed that now is the time to focus most on solving financial imbalances,” Lee said. “From the next meeting, we will be discussing whether it is appropriate to adjust the degree of monetary policy accommodation.”

Considering the resurgence of coronavirus cases in the country, to over 1,000 cases per day, creating a so-called fourth wave of the pandemic, plans to start upping rates were believed by some analysts to have been derailed, but Lee said that despite the recent spike in Covid-19 cases, the bank believes the Korean economy will continue to be on track to recovery through the latter half of the year and said the need to start adjusting monetary policies has become more pressing.

As for the country’s gross domestic product (GDP) this year, Lee said “we expect the GDP growth this year to be around 4 percent, consistent with the forecast in May, although recovery in private consumption may slow due to the tightened social distancing measures recently.”

Lee said that the country’s economy won’t be hit as hard as it has been last year, partly as the public is more used to the situation than before and more vaccinations are to come.

On concerns a rate increase would disproportionately affect the self-employed and economically vulnerable groups in the country, Lee said that maintaining an accommodative policy stance for too long while macroeconomic conditions are improving can lead to greater imbalances in the economy, such as rising debt and asset prices, adding that fiscal policies targeting specific groups that were affected more by the Covid-19 pandemic would be more effective at helping them than expansionary monetary policies at this point.

“The briefing today clearly showed the central bank’s strong will,” said Kim Ji-na, an analyst from IBK Securities. “We maintain our projection that there will be a rate increase in the fourth quarter, more specifically in October.”

“During the August meeting, the board can send a greater signal to the market with maybe two members of the board suggesting a rate increase, while still holding the key rate,” said analyst Kim Sung-soo of Hanwha Investment & Securities.

In volatile markets, boring time deposits are in favor