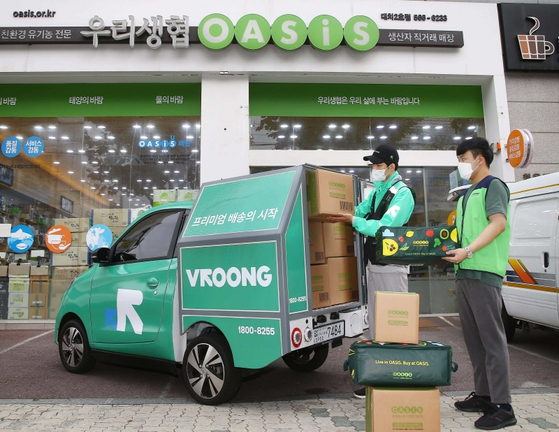 
Mesh Korea, operator of the food delivery service Vroong, established a joint venture with fresh food e-commerce Oasis Market to deliver a range of goods to customers within an hour.

Kim Young-jun, CEO of Oasis Market, which is 85.11 percent owned by Kosdaq-listed Gaeasoft, will be the largest shareholder with 50.0001 percent of the joint venture. Mesh Korea CEO Yoo Jeong-bum will own 49.9999 percent.

The companies plan to launch a "quick commerce" service, which refers to delivering goods within an hour, possibly named V Mart. It is supposed to start operating in the second half of this year.

Other delivery platforms have launched quick commerce services in the past. Baedal Minjok was the first, adding the B Mart service to its food delivery application Baemin in 2019. In 2020, Yogiyo offered quick delivery via Yomart. Coupang Eats entered the market July 7.