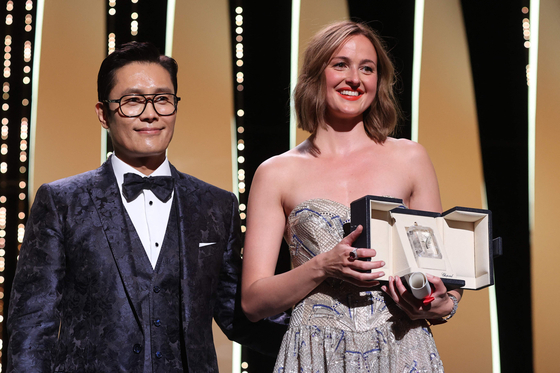 
Norwegian actress Renate Reinsve poses on stage next to Korean actor Lee Byung-hun after she was awarded the Best Actress Prize for her part in the film "Verdens Verste Menneske" ("The Worst Person In The World") during the closing ceremony of the 74th Cannes Film Festival in Cannes, southern France, on Saturday.
Shock-fest "Titane" took home the Palme d'Or prize, revealed early at a closing ceremony in an embarrassing slip-up by jury president Spike Lee. French director Julie Ducournau is only the second woman to win the prize, for a movie that was one of the wildest, sexiest and most violent ever shown at the Cannes film festival. [AFP/YONHAP]

Celebrities donate to victims of wildfires raging along east coast