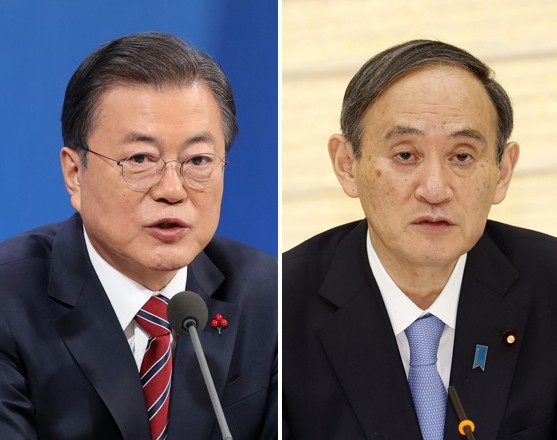 A summit with Japan will not take place during the Tokyo Olympics, the Blue House confirmed Monday.

“President Moon Jae-in decided not to visit Japan for the occasion of the Tokyo Olympics,” said Park Soo-hyun, presidential spokesman, in a statement issued Monday afternoon.

“The governments of the Republic of Korea and Japan held meaningful discussions on making progress on historical issues between the two countries […] and although the consultations between the two sides were conducted in a friendly atmosphere and the two sides had reached a considerable amount of understanding, we judged [the outcomes of the consultations] were still insufficient to bring about a summit,” Park said.

The possibility of a summit between President Moon and Japanese Prime Minister Yoshihide Suga had been floated by media outlets in both nations for weeks. It would have been the first between the two leaders.

Even on Monday morning, the Yomiuri Shimbun, Japan's largest newspaper, reported that Moon would visit Tokyo to attend the Olympics, which launches Friday, and hold a summit with Suga.

The Yomiuri reported that the two leaders would discuss the so-called “comfort women” issue, or Japanese wartime sexual slavery, and forced labor issue, which date back to the Japanese occupation of Korea (1910-1945).

“We have already expressed our strong regrets to the Japanese government for leaking their decisions to media outlets,” said presidential spokesperson Park in a radio interview around 7 a.m. Monday.

Park then made a comment that read as a specific condition for the summit to take place, involving a diplomatic gaffe by Japan’s deputy chief of mission to Korea, Hirohisa Soma, in a conversation with a JTBC reporter last week.

Soma was reprimanded by the Japanese ambassador to Korea, who issued a statement expressing his regrets over the weekend.

The idea that the Korean government was waiting for Japan to take some action related to Soma became obvious when the Blue House, about an hour after Park’s radio interview, issued a statement stating that it was “waiting on a convincing action from the Japanese side to address an obstacle to the summit.”

The first official statement on Soma’s remarks from the central government of Japan followed soon, when Katsunobu Kato, Japan’s chief cabinet secretary to the prime minster, held a press briefing at 11:35 a.m.

“The remarks were very inappropriate,” Kato said during the press briefing.

Asked whether Soma would be dismissed, Kato said the decision was up to Toshimitsu Motegi, Japan's foreign minister.

Soma's faux pas was the latest blow to relations between Japan and Korea, including export restrictions on Korea and Tokyo's planned discharge of contaminated water from the Fukushima power plant into the Pacific Ocean.

"We hope that Japan would host a safe and successful Olympics," Park said. "Our athletes are competing in various difficult conditions, but we hope that they will be able to perform to their fullest potential and return home safely."

Minister of Culture Hwang Hee will attend the opening ceremony of the Olympics, according to the Blue House.