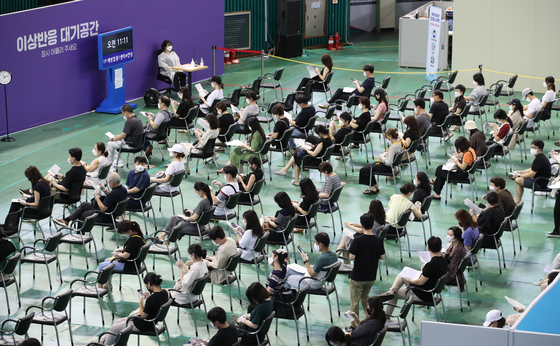 A vaccination center in Bucheon, Gyeonggi, is crowded with people waiting to get a shot on Monday, as health authorities started a program to inoculate high school seniors and faculty members at 290 vaccination centers across the country. [YONHAP]


Tourist hotspots outside the capital region such as Gangneung and Jeju are raising their guards against the spread of the coronavirus.

The eastern coastal city of Gangneung, Gangwon, implemented the strictest distancing Level 4 on Monday, which will be in effect for one week until July 25.

Gangneung is the first non-capital region to adopt the toughest curbs, after the greater Seoul area was placed under the same Level 4 last week.

Under Level 4, gatherings of more than two people are banned from 6 p.m. until 5 a.m. the next day, while up to four people can get together during other times of the day.

In Gangneung, restaurants, cafes and bars will be forced to close at 8 p.m., earlier than in the Seoul metropolitan area, where they can operate until 10 p.m.

Beaches will be open until the end of August as scheduled, but entry is prohibited after 8 p.m.

“We wanted to protect both the public health and people’s livelihoods, but we’ve faced the gravest crisis since the Covid-19 outbreak due to the spread of the Delta variant,” Kim Han-geun, the mayor of Gangneung said.

“Please refrain from doing social activities and act as if the city is in a lockdown,” the mayor added.

According to Gangwon, a total of 319 people were newly infected in the province during July, with 41.9 percent coming from the popular vacation destination of Gangneung.

Nearly half — 43 percent — of the new patients in Gangneung were people in their 20s.

However, despite the fourth wave of infections and heightened social distancing rule, around 197,000 travelers flooded to six coastal cities and counties in Gangwon last weekend.

“We find it very concerning that infections in East Sea coastal cities and counties are rapidly increasing from last week, especially among young people in their 20s and 30s,” Kim Sung-ho, vice governor for administrative affairs of Gangwon, said.

“We sincerely ask the people to cooperate with distancing measures until late August, when half of the province's people are vaccinated,” Kim added.

Only up to four people are allowed to meet, and all clubs and bars that allow dancing have to shut down completely. This is meant to block clubbers from coming into the region to enjoy the nightlife.

In addition, vaccine incentives exempting partially or fully inoculated people from limits on gatherings are suspended.

The central city of Daejeon announced it will go up to Level 3 for two weeks from Thursday through Aug. 4.

The announcement, made on Monday, comes after average daily cases have been the highest since the outbreak of the virus.

Starting Thursday, restaurants, cafes, bars and clubs will be forced to close at 10 p.m.

Private gatherings, including with family members, will be limited to four people. 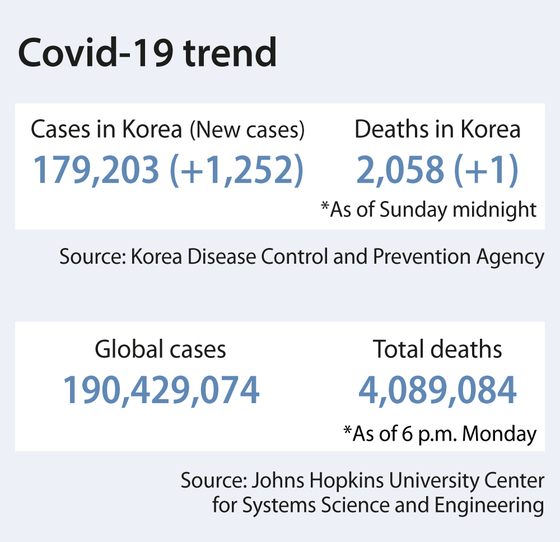 With the virus spreading nationwide, Korea confirmed 1,252 new Covid-19 cases on Monday, including 1,208 local infections, raising the total caseload to 179,203.

There was one more virus death, bringing the death toll to 2,058.

In order to protect those connected to the all-important College Scholastic Ability Test (CSAT) in mid-November, vaccinations began Monday for high school seniors and teachers nationwide.

Some 632,000 high school seniors and teachers will be getting their first Pfizer shots at vaccination centers across the country through July 30.

This is the first time Korea is offering jabs to teenagers.

As of Sunday midnight, around 16.13 million people, or 31.4 percent of the country's population, had received one shot of a Covid-19 vaccine, the Korea Disease Control and Prevention Agnecy (KDCA) said.

Around 6.56 million people, or 11.4 percent, have been fully vaccinated.