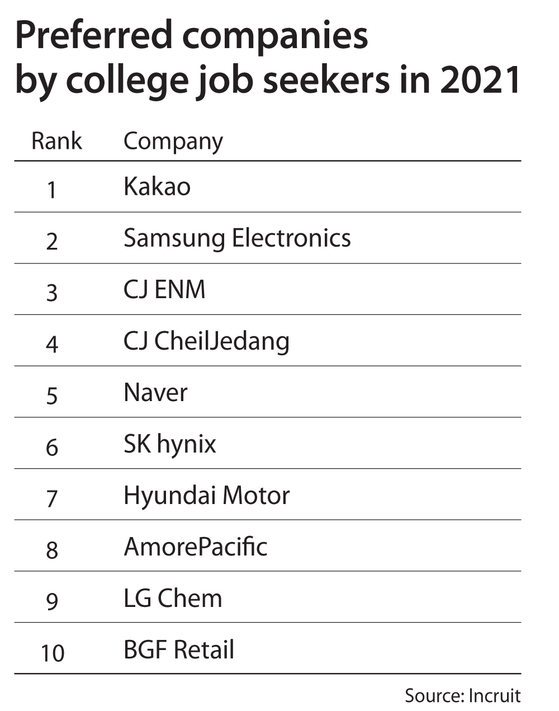 For college students, BGF retail is hot and Korean Air Lines is not, at least according to a recent survey of where they would most like to work.

Incruit released its ranking based on about 1,000 responses, and the list has been shaken up by the pandemic as potential employees seek opportunity and safety in an uncertain world.

The survey covered the 150 largest Kospi-listed companies based on market capitalization.


Kakao is No. 1 this year, as it was last year, and Samsung Electronics held steady at No. 2.

The respondents for Kakao said they were attracted to the company’s value and its potential for growth. Reputation also helped.


“Stable growth of the business and a lively image due to its starting of various new businesses despite the coronavirus seem to have factored into their preferences,” Incruit said.

CJ ENM, an entertainment company, came in No. 3, up one spot from last year, while CJ CheilJedang was No. 4, up five spots.

Respondents who picked CJ ENM or CJ CheilJedang said they were attracted to the overseas activities of these companies.

Airlines, which are normally quite popular, were not favored this year as their businesses collapse during the pandemic.

Korean Air Lines fell from fifth to No. 18.

Not all tech companies did well in the survey. Naver dropped to the fifth spot from the third. In 2019, it was No. 1.


SK hynix, a semiconductor company, was ranked six. Last year, it wasn’t even in the top 10. Salary and incentives were the main reasons, according to the respondents.