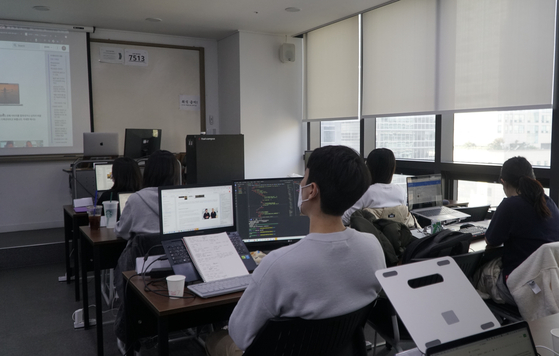 
Koreans are applying to enter cram schools that help them apply for jobs at the country’s five most popular tech companies, and they are willing to part with some of their salary if they do get an offer.

Park Ba-reum, a 32-year-old, quit her job in July and started taking classes at Gangnam’s Day 1 Company, a hagwon cram school specializing in programming and developer training. Her goal is to work for Kakao one day.

“I actually sleep a lot compared to other people,” said Park. “There are many of my friends who consider sleeping six hours to be a lot.”

Being a developer at Naver, Kakao, Line, Coupang or Woowa Brothers is like hitting the jackpot for young Koreans, as they pay a salary of 50 to 60 million won ($42,000 to $50,400) for new developers. The companies grew rapidly due to the pandemic putting an emphasis on online businesses, making them even more popular.

For some Koreans, exhausting hours of study don’t end with university graduation. Some seek to stand out in the competitive job market by turning to hagwons to get prepared.

Day 1 Company in March started a six-month course that aims to help students land a developer job at the five tech companies. The course is free, but people who get a job at one of the five firms have to pay 1 percent of their salary for two years, up to 1 million won.

A course starting in March had 15 places; 4,185 applied. Applicants are put through a gauntlet of tests and is subjected to a final interview. Five dropped out among the selected 15, but seven started working at Naver or Kakao after the course ended in September.

The developer prep course took 20 people in July and 13 in September. A course specializing in data science, also targeting jobs at the five tech companies, took 12 in October.

The classes are centered on training through hands-on programming experience. A class dealing with HTML and CSS coding was held starting at 3 p.m. on Nov. 5. The goal for the day was to duplicate a Netflix login page.

Another class the same day was for group presentations about games and web-based services created in the previous week. A group was introducing an online game they made, which was similar to the mafia game, a party game where players have to find and eliminate hidden mafiaoso.

Many wish to take the course, but a significant number still drop out. A total of 48 people went through Day 1 Company’s three developer prep courses, but 11 chose to drop out.

Some leave due to the tiring 12-hour study schedule and some due to receiving low scores in the mock coding tests.

“Naver, Kakao, Line, Coupang and Woowa Brothers are top-tier companies, and studying for 12 hours a day excluding sleep still doesn’t guarantee a position at the company,” said Day 1 Company Lead Product Manager Kang Ho-jun. “The companies don’t take academic background into consideration. We of course train them as if we are helping them prepare for the College Scholastic Ability Test.”

Kakao doesn’t require information about academic background, major, age and gender from those applying. All of the five tech companies have coding tests, which are considered to be heavily weighted when deciding who gets the job.

People who didn’t get a job at their dream companies often give it another shot.

A 26-year-old who used to work as a freelance designer didn’t get a job at Naver and Kakao after the six-month course. Although he did get multiple job offers from other businesses, he decided to give it one more try for the two companies after seven classmates got offers from the big tech firms.

“It’s somewhat scary to take on a new challenge in my 30s,” said Park Ba-reum, currently taking the course. “But I thought taking time to become a good developer in a company where there are a lot of colleagues to learn from wouldn’t be considered ‘late,’ but actually a faster route in life.”