Hyundai Mobis can read your mind to see if you're tired

Hyundai Mobis can read your mind to see if you're tired 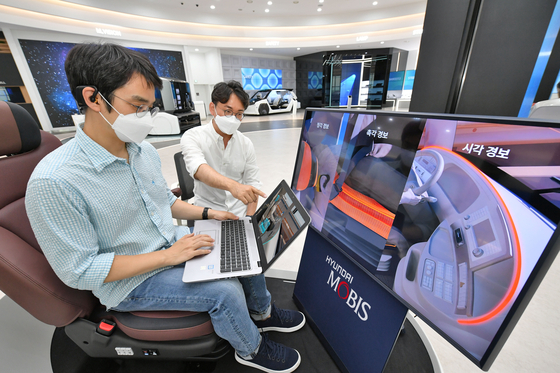 Researchers at Hyundai Mobis try out the M.Brain technology which detects brainwave and warns the driver. [HYUNDAI MOBIS]

Auto parts maker Hyundai Mobis says it can now detect a driver’s brainwaves and send a warning if the driver seems to be fatigued.

Dubbed the M.Brain, the technology can detect brainwaves around the driver’s ears through sensors on a physical earpiece that the driver needs to wear. This allows M.Brain to monitor the driver’s condition in real-time.

Measuring the driver's heartbeat or tracking their pupils have been used to monitor the driver’s condition in the past, but detecting brainwaves is a world first, Hyundai Mobis claims.

If the brainwaves suggest the driver is fatigued, warnings are sent through various methods including LED-lights around the driver’s seat, the vibration of the driver's seat and a warning sound from the speaker installed on the headrest.

Hyundai Mobis says it has worked on the technology for three years.

It plans to sign a memorandum of understanding with Gyeonggi to run a pilot test of the technology on the province’s public buses within this year.

“Hyundai Mobis has started to show achievements in not only technology needed to ensure the driver’s safety in a completely autonomous car but also in digital health area as well,” said Lee Seung-hwan, head of Advanced Engineering Sector at Hyundai Mobis.

“The company will continue to show development in technology related to smart city and purpose-built vehicles.”