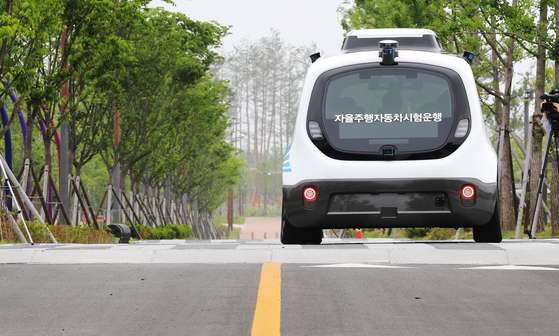 An autonomous vehicle test runs at a park in Sejong on May 25. [YONHAP]


When a self-driving car gets into an accident, who is liable? That question needs to be answered before fully autonomous cars are allowed on the road.


Insurance companies are keen to get involved in this dynamic, to protect the drivers and the industry from possible claims, especially as the government gears up to promote development of the technology.

Early this year, the Korean government allowed introduction and sale of Level 3 autonomous cars from July.

Under a system established by the Society of Automotive Engineers, Level 3 autonomous cars can take over the driving functions under certain circumstances.

It is the first stage where drivers can take their hands off the steering wheel.

They cover all damage caused by a self-driving car, unless someone is clearly at fault. Claims related to third-party hacking and malfunctioning external equipment, such as traffic lights which need to interact with the car in order for them to navigate on the road properly, are covered.

“In order for swift compensation, the program pays the victim in full amount before calculating the liability just like ordinary car insurance and makes a claim to the at fault party — for example, the car manufacturer,” the company said. “As long as it is clear that the car was driving in a self-driving mode, the program doesn’t charge the driver extra.”

The newly launched program is limited to the insuring of self-driving cars used for test purposes, but the insurer said once the regulations and the liability standards are clarified, it will develop into a program for ordinary drivers as well.

The new program also covers self-driving vehicles used for mobility service purposes, such as for taxis or shuttle buses.

“We have been active in laying out the insurance program for self-driving cars because although they are currently for only test cars or special mobility services, it would give us the upper hand in the future, in terms of collecting data and understanding the new industry,” said Lee Byung-joo from Hyundai Marine &Fire Insurance’s communication team.

Samsung Fire & Marine Insurance has a similar insurance program that covers accidents involving self-driving cars. It was introduced in 2017 and is dedicated to test vehicles.

The insurer said it doesn’t yet have any plans to expand its current program.

With data from FMTC, KB Insurance said it would draft a program for self-driving cars.

From the latter half of this year, every Level 3 autonomous car must to install a device that can record driving data, a black box for accidents.

It is to determine whether the driver was intervening in the driving or the car was running on its own.

The government also decided to set up a separate committee within the Ministry of Transport that could determine whether there was a faulty component in a vehicle when an accident happens.

“It is risky for insurance companies to roll out a full-fledged insurance program for self-driving cars because there isn’t much data collected yet,” said Yi Kyong-su, professor of mechanical engineering at Seoul National University and also the head of FMTC.

“Insurance programs for self-driving vehicles will slowly get developed. And even if they do get launched, they will have to go through numerous revisions as more data gets collected along the way.”