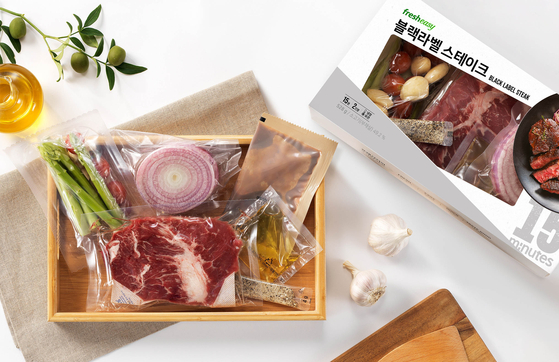 
Korea’s meal kit market is growing rapidly during the pandemic, and small startups are leading the rise.

Han Ji-young, a 38-year-old living in Seoul, stocked her refrigerator with beef stew, budaejjigae and cheonggukjang meal kits after the government implemented Level 4 social distancing measures in Seoul. Budaejjigae is a spicy stew made with sausage, beef and noodles, and cheonggukjang is a Korean fermented soybean stew.

“Eggs and vegetables are so expensive, and I buy meal kits for dishes that require a lot of ingredients,” said Han. “It’s so hot these days that I get covered in sweat after cooking for a long time, and I’m drawn towards using easy meal kits.”

A meal kit is a package that includes pre-portioned ingredients and seasoning, making the cooking process more easy and convenient.

A wide variety of options, including soups and stews, fried rice and grilled fish, are offered as meal kits today. The Covid-19 pandemic drove up demand for cooking and eating at home, pulling up sales of meal kits.

"With the development of refrigeration technology, options such as buckwheat noodles can be offered as meal kits, and the taste is also great," said Won Yong-shin, deputy general manager at Hyundai Department Store’s To Home, a delivery service. "Food companies say the meal kit market is promising."

Startups including Fresh Easy — which is 7.7 percent owned by GS Home Shopping — My Chef and Tasty9 are some of the key players, with Fresh Easy claiming 60 percent of the market. Its revenue was 127.1 billion won last year, up 78.5 percent on year. Tasty9 reported revenue of 23.2 billion won last year, surging 217.8 percent on year. Fueled by the active growth, the meal kit maker announced it is preparing for an initial public offering (IPO) on the Kosdaq market, aiming to list early next year.

Booming e-commerce and overnight delivery also helped, as the products are mostly sold online by companies such as Coupang, 11st and Market Kurly. Ingredients included in the meal kits are fresh and have to be consumed within three to four days, and fast delivery is key.

Big name companies have also jumped into the market. CJ CheilJedang operates Cookit, Hy, formerly known as Korea Yakult, has Eats On and Emart has Peacock. Many discount marts have started carrying meal kits. Homeplus opened separate “meal-kit zones” at branches starting in June. Meal kits by My Chef began to be sold at Lotte Mart in May.

“A lot of young Koreans, who are tired of delivery foods, want to try out easy meal kits,” said a spokesperson for Homeplus. “Middle-age people also buy a lot of ready-made stew meal kits because the quality is high and they taste good.”

With the pandemic continuing longer than expected and strict social distancing measures making it hard for people to eat at restaurants, companies are creating meal kits that include items found at popular restaurants. Known as restaurant meal replacements (RMRs), the products allow customers to easily try out food made by celebrity chefs and sold at restaurants booked for months.

Tasty9 teamed up with celebrity chef Choi Hyun-seok to introduce a beef tenderloin steak meal kit last year, selling 1.2-billion-won worth during the first half of 2021. Hyundai Department Store started selling meal kits with dishes sold at Mongtan, known for its grilled beef, and Saddler Haus, a bakery.

Fresh Easy partnered with the Ministry of SMEs and Startups to introduce a series of meal kits with small restaurant owners.

“We’re traveling around the country to reach out to popular restaurants,” said a spokesperson for Emart’s Peacock. “Many famous restaurants receive a lot of business deals, and the competition is intense.”