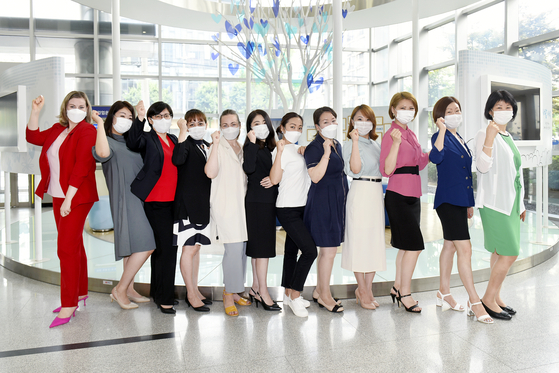 Samsung Life Insurance's insurance agents pose for a photo at the company's Yeongdeungpo Star branch in western Seoul. Of 50 insurance agents in the branch, 45 are foreigners of various nationalities, including people from Russia, Mongolia and Uzbekistan. [SAMSUNG LIFE INSURANCE]

Tsay Tatyana, a 38-year-old Uzbek national, got a job as a Samsung Life Insurance agent in March last year. Tsay, who can speak Korean, English and Russian, sells insurance products to foreign residents in Korea.

She travels throughout the country, to places such as Asan, South Chungcheong, Suncheon, South Jeolla and the city of Gwangju, to meet foreign clients during the weekends.

“Whenever I receive training about a new product, I spend time translating the information into English or Russian,” said Tsay. “I devote a lot of time for foreign customers to make sure that they fully understand the insurance products.”

With the local insurance market saturated, companies are now turning their attention to foreigners living in Korea. In order to attract them, securing foreign insurance agents is a key to success.

Language has been the biggest barrier in communicating with foreign customers, as insurance terms are very difficult to explain and comprehend. Foreign insurance agents can explain the terms to customers in their own languages.

“Some agents are good at not only their own languages but also English and Korean, so it is easy for them to attract foreign customers,” said a spokesperson for Samsung Life Insurance. 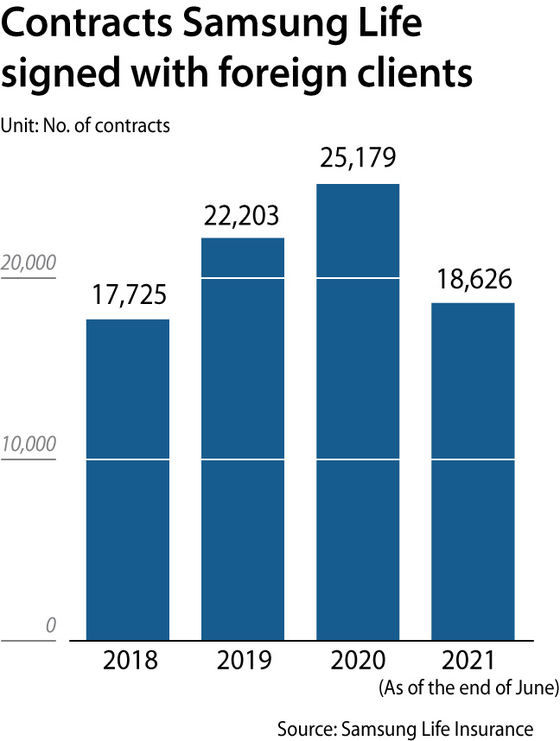 Tsay belongs to Samsung Life Insurance’s Yeongdeungpo Star branch in western Seoul, where a total of 50 insurance agents work. Of them, 45 are foreigners of various nationalities, including people from Russia, Mongolia, Uzbekistan, the Ukraine, Kazakhstan and Kyrgyzstan.

The branch has been performing well in terms of the number of contracts signed. Insurance agents from the branch have sold roughly 1,280 contracts over the past three months.

The number of foreign residents in Korea is on the rise, which is a positive sign for insurance companies. Compared to Korean nationals, many foreigners living in Korea have not taken out insurance yet.

As of end of 2019, roughly 2.21 million people in Korea are foreign citizens or naturalized Koreans, according to data from the Ministry of the Interior and Safety. That’s up 25.6 percent compared to 2016.

“Many foreign residents in Korea work at factories and restaurants, and many of them don’t go hospital even though they are sick due to the financial concerns,” said Vitenko Anna, a Russian insurance agent of Samsung Life Insurance. “We mostly offer them life insurance or products that are related to health.”

Hanwha Life said the number of new contracts sold to foreign customers has been growing by some 25,000 every year. The company currently has 508 foreign insurance agents.

“As the income level of foreign residents in Korea has been increasing, they spend more for insurance products,” said a source from the industry.