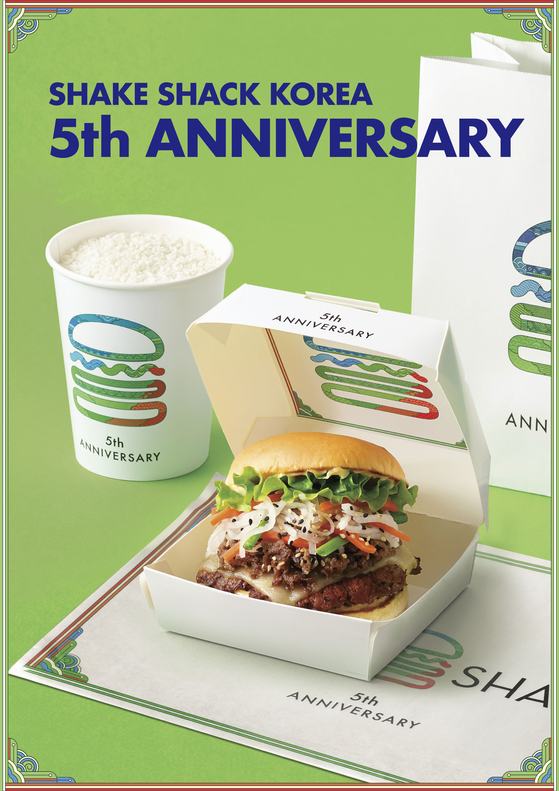 Shake Shack's Seoul Style Bulgogi Burger and Makgeolli Shake. They will be available in all Shake Shacks across the country starting Thursday through the end of August. [SPC GROUP]

Shake Shack is going local, with a bulgogi burger and a makgeolli shake.

Paris Croissant, which has an exclusive licensing agreement with the New York-based and New York Stock Exchange-listed burger chain, announced the offerings Wednesday.

The introduction is to celebrate the fifth anniversary of burger chain's landing in Korea. Shake Shack culinary director Mark Rosati developed the products.

The Seoul Style Bulgogi Burger has a Black Angus burger patty topped with bulgogi and spiced with bulgogi mayo sauce. It will cost 12,800 won ($11.3).

The bulgogi will be supplied by Hanilkwan, a restaurant founded in Jongno, central Seoul, in 1939 and now with six branches.

McDonald’s and Lotteria both offer a similar product in Korea.

The Makgeolli Shake is a vanilla custard shake with makgeolli, a fermented, rice-based alcoholic drink. Yangpyeong County, Gyeonggi-based Jipyeong Brewery, which was founded in 1925 and claims to be the oldest brewery in the country, will be supplying the makgeolli.

A version of the shake is available without alcohol.

The two items will be available through the end of August at all Shake Shack stores across the country starting Thursday. They are only available in Korea for now.