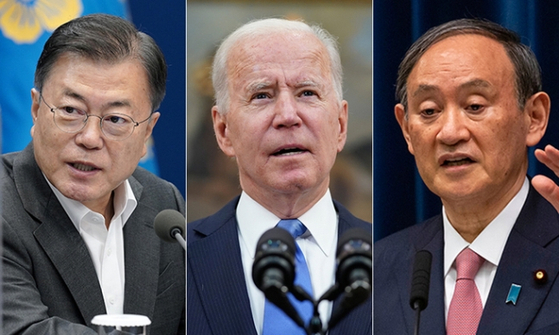 The Huanqiu Shibao, a government-run tabloid in China, ran a column Tuesday on failed efforts to hold a Japan-Korea summit before the Olympic Games, stressing how disappointing it must have been for U.S. President Joe Biden.

“So far, Moon Jae-in has not held face-to-face talks with Yoshihide Suga, who became Japanese prime minister in September last year,” reads the column, written in Chinese. “The colder relationship between South Korea and Japan worries U.S. President Biden. He has repeatedly [tried to create peace between the two] but the effect has been minimal.”

The column, entitled, “Moon Jae-in gave up visiting Japan during the Olympic Games, Professor in Korea: The US government will undoubtedly be disappointed,” included comments from Leif-Eric Easley, a professor of international politics at Ewha Womans University in central Seoul.

“Easley said that South Korea and Japan wasted the opportunity to signal their willingness to improve relations, and the United States would be disappointed,” read the column.

The possibility of a Japan-Korea summit taking place during the Tokyo Olympics was floated by media in both countries for weeks. The Blue House announced Monday its intention not to hold a summit.

The Huanqiu Shibao piece highlighted several problems between Japan and Korea during the summit negotiations, including a headline-grabbing diplomatic gaffe by a Japanese envoy in Korea.

“Just before the South Korean government announced the […] decision [to forgo the summit], the media broke that Hirohisa Soma was talking about South Korea-Japan relations and used improper language about Moon Jae-in, which may have caused the president of South Korea to abandon his visit to Japan,” reads the column.

Soma, Japan’s deputy chief of mission in Korea, described Moon’s efforts to hold a summit with Japan as masturbatory during a conversation with a JTBC reporter last week. The Korean government protested, summoned the Japanese ambassador and requested due action. The ambassador acknowledged the gaffe and expressed his regrets, which was followed by press comments from Japan’s chief cabinet secretary, which also deemed Soma’s comments as “very inappropriate.”

The column highlighted other thorny issues between the two nations, including Japanese export restrictions on Korea, which forced bilateral ties to their “lowest point in two years.”

“South Korean observers said that the South Korean government may request leaders’ talks to achieve the result of Japan’s cancellation of trade restrictions against South Korea, which was rejected by the Japanese side,” it said, adding that Moon wouldn’t have been eager to have a summit and return empty-handed on that issue.

The column praised Korea’s decision to forgo the summit, criticizing Japan’s constant leaking of the consultation process to the media.

“Japanese media frequently released news like ‘Moon Jae-in's confirmed visit to Japan,’ actively leaking the progress of negotiations between the Japanese and South Korean diplomatic agencies,” it said. “The aim was to put pressure on the South Korean side to urge it to soften its attitude towards Japan and cooperate with the Japanese side to ease relations between the two countries.”

Citing remarks from Lu Hao, a deputy director of the Institute of Japanese Studies of the Chinese Academy of Social Sciences, the piece said that Korea had, by rejecting the summit, “strengthen[ed] its own position,” adding that the summit would have created “conditions for the Yoshihide Suga government to increase its popularity.”