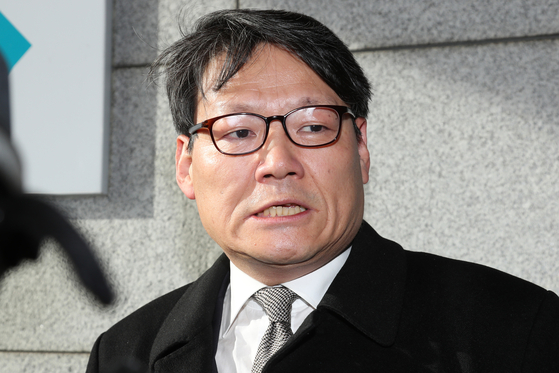 
Investigators made a second attempt to seize evidence from the Blue House to find whether a presidential aide abused his power by arranging a reinvestigation of a sex scandal involving a top official from the previous administration.

Investigators from the Corruption Investigation Office for High-ranking Officials (CIO) presented a search and seizure warrant to the Blue House Wednesday morning to confiscate evidence from the office of Presidential Secretary for Civil Affairs Lee Kwang-cheol.

The investigators made their first attempt to seize evidence from Lee’s office on Tuesday, but failed when the Blue House refused to cooperate. The CIO raided Lee’s home on Tuesday.

Although Lee is not a suspect in the CIO’s investigation, investigators believe that he masterminded the administration’s reinvestigation into a major sex scandal involving former Vice Minister of Justice Kim Hak-eui.

The CIO is currently investigating an allegation that a prosecutor, Lee Gyu-won, falsified a report in 2018 to incriminate Kim, leading to a reinvestigation in 2019 into his sex-for-bribes scandal. Presidential Secretary Lee was suspected of ordering Prosecutor Lee to falsify that report and leak it to the media.

Kim resigned as vice justice minister in March 2013 after six days on the job following circulation of a video that appeared to show him engaging in sexual intercourse with a woman at a party. He was investigated by the prosecution in 2013 and 2014 for taking bribes and sexual favors from businessmen from 2006 to 2009, but cleared each time.

In 2018, Prosecutor Lee interviewed Yun Jung-cheon, a businessman, and compiled a report of his claims that he hired women to have sex with high-profile figures including Kim. The report was leaked to the media, and President Moon Jae-in ordered a third probe in March 2019.

In a separate probe by the prosecution, Presidential Secretary Lee, Prosecutor Lee and another senior official from the Justice Ministry were indicted on charges of circumventing the law to slap an overseas travel ban on Kim in 2019. The Suwon District Prosecutors’ Office indicted Lee Kwang-cheol earlier this month for abuse of power for allegedly masterminding the travel ban.

Following the indictment, Lee tendered his resignation to Moon. Moon, however, had not processed it as of Wednesday, and Lee still serves as civil affairs secretary of the Blue House.