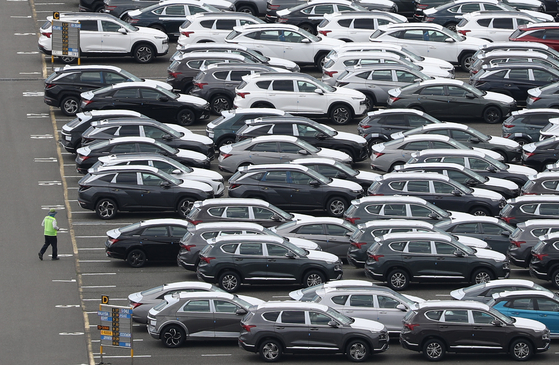 Hyundai Motor cars are lined up at a lot next to Ulsan factory in May, waiting to be shipped for export. [YONHAP]


Hyundai Motor reported 1.98 trillion won ($1,72 billion) in net profit in the second quarter, a whopping 425.5 percent jump from a year earlier thanks to recovery of the global auto market and sales of high-margin SUVs.

It beat a market consensus of 1.6 trillion won compiled by FnGuide.

“Hyundai Motor’s sales recorded a big increase due to a base effect from last year’s Covid-19 and an overall recovery in demand for cars globally,” the carmaker said in a release Thursday.

Sales in Europe jumped 109.3 percent compared to the year before and North American sales rose 67.6 percent. 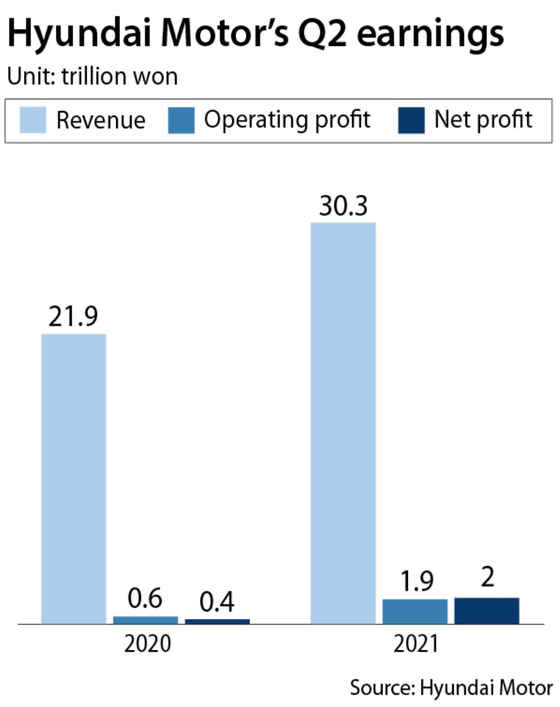 Sales of electric vehicles (EVs) are expected to grow in the second half, according to the carmaker, as a slew of electric models are scheduled to launch later in the year.

The production of the Ioniq 5 was disrupted in the first half due to shortage of auto chips and electric motor components.

As a result, the carmaker delivered about 10,000 Ioniq 5s in Korea and in Europe as of second quarter but has 30,000 orders waiting to be manufactured.

"Production will increase from the third quarter with normalization of the component supply," Koo Za-young, a senior vice president at Hyundai Motor in charge of investor relations, said on a conference call Thursday.

The carmaker recently launched an electric version of its Genesis G80 sedan and is planning to launch a new electric model made on the EV-dedicated manufacturing platform E-GMP -- known by its code name JW -- in the latter half.

The impact of the global auto chip shortage is expected to linger in the second half.

"Auto chip supplies are going to get better from the third quarter, but a supply shortage is likely to continue," said Seo Gang-hyun, executive vice president of finance and accounting at Hyundai Motor.

"In order to stabilize the supply of semiconductors, we are going to place order on an yearly basis from now on. Orders for semiconductors for 2022 have already been placed."

The carmaker is also vying for partnerships with semiconductor manufacturers to prevent shortages in the future, Seo said on the conference call.

On the back of better-than-expected earnings, Hyundai Motor will pay an interim dividend this year of 1,000 won per share, the same as 2019. Last year, it didn't pay any interim dividend due to the coronavirus.

Hyundai Motor, Kia and Stellantis vehicles are being recalled