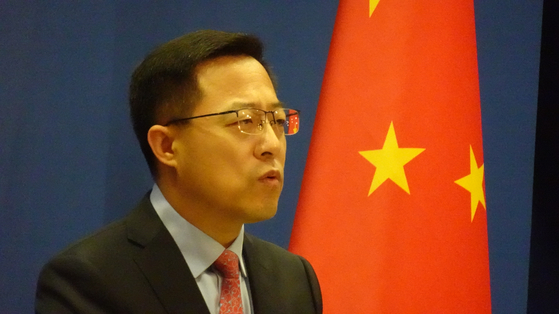 China’s Foreign Ministry defended its ambassador’s criticism of a Korean presidential candidate for his views on the Thaad missile system, a serious point of contention between China and Korea.

“I've noted the remarks by some ROK [Republic of Korea] political figures on issues relating to Hong Kong and THAAD, many of which China finds unacceptable,” said Zhao Lijian, Chinese Foreign Ministry spokesperson, during a press conference on Wednesday.

“Chinese diplomats posted overseas have the responsibility to make clear China's position on issues concerning major interests of the country in a timely manner," he continued. "This is by no means interference in domestic affairs or influence on elections of other countries.”

In an op-ed in the JoongAng Ilbo on July 16, Chinese Ambassador to Korea Xing Haiming criticized presidential candidate Yoon Seok-youl’s views on Thaad, or the Terminal High Altitude Area Defense system that was deployed in Korea through an agreement between Seoul and Washington in 2016 to counter threats from North Korea.

China claimd the system's powerful radar can be used to spy on its territory. In retaliation for the deployment, the country placed economic sanctions on Korea, restricted Korea’s cultural exports to China including K-dramas, movies and concerts, and pressured Chinese tour agencies to stop selling trips to Korea.

“I saw former Prosecutor General Yoon Seok-youl’s interview in the JoongAng Ilbo on July 15,” wrote Xing in his op-ed. “I respect Yoon, but I have to be frank [about what he said] in relation to China.

“I want to emphasize that the American action of placing Thaad in Korea has seriously undermined the security interests of China,” Xing wrote. “In the interview, Yoon speaks about Chinese radar, and I cannot comprehend his claims. I have a Korean friend, and I have never once heard from him that the Chinese radar is perceived as a threat to Korea.”

In an interview with the JoongAng Ilbo on July 15, Yoon said China should think about getting rid of its own long-range radar along its borders before calling for the withdrawal of the Thaad system from Korea.

He added that Korea’s security and diplomatic interests are aligned closely with those of the United States, stating that Korea’s foreign relations “should be founded on a strong Korea-U.S. alliance and bridge out from there, and that this way China and other nations would respect [Korea]."

Korea’s Foreign Ministry said it requested the Chinese ambassador to be more careful with his opinions.

“An ambassador ought to exercise discretion when expressing his or her views,” a ministry official told the Korea Joongang Daily on Tuesday. “We have contacted Ambassador Xing today to convey our position on the matter, and we have also spoken about the matter to the Chinese government through our diplomatic channel.”

In October 2017, China and Korea reached an agreement to bring exchanges and cooperation back on track, and Korea reiterated its position that Thaad was not aimed at any third party other than North Korea, according to Korea's Foreign Ministry.

China reiterated its concerns but took note of Korea’s position, expressing its hopes that Korea will make "real and earnest efforts" for the bilateral ties, according to the Chinese Foreign Ministry.

When President Moon Jae-in met with Chinese Premier Li Keqiang in the Philippines in November 2017, the Chinese government reiterated that the two governments had reached a consensus on the Thaad issue.

Some experts in Korea say China has not given up on the idea of a complete withdrawal of the Thaad system from Korea.

“Thaad needs to go, that is the big picture for China,” said Kang Jun-young, a professor of Chinese politics at Hankuk University of Foreign Studies. “They know that decisions on Thaad are not something for Korea to make independently, but seeing how Korea, especially as of late, has been drawing near the United States, Beijing is trying to use the Thaad card to pressure Seoul.”

The summit between Moon and U.S. President Joe Biden in May resulted in a joint statement that contained a number of touchy topics for China, including peace and stability in the Indo-Pacific region and the Taiwan Strait.

Hong Kong and its protests, another issue that Beijing has warned other countries not to interfere in, was brought up in an interview by Bloomberg news of Korea’s People Power Party leader Lee Jun-seok last week. Lee vowed to push back against Chinese "cruelty" in Hong Kong.

“I would like to stress that Hong Kong is part of China and its affairs are purely China's domestic affairs,” Chinese Foreign Ministry spokesman Zhao said on Wednesday. “No country, organization or individual has any right to or should make wanton comments.”

A stern response is the best medicine