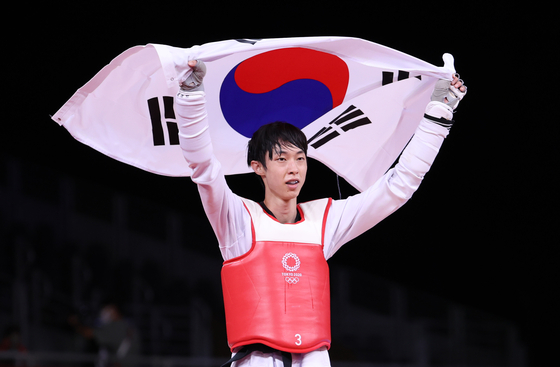 Jang Jun celebrates after winning the bronze medal in the men's 58 kilogram at Makuhari Messe Hall in Chiba, Japan. [YONHAP]


World No. 1 Jang Jun took home the bronze medal in the men's 58 kilogram on Saturday, missing out on the gold medal game after an unexpected loss to Mohamed Khalil Jendoubi of Tunisia in the semifinals.

Jang beat Omar Salim of Hungary in the bronze medal match with 46 points to 16, dominating throughout all three rounds for a comfortable win.

As well as outclassing his opponent, Jang also showed a far more impressive economy of movement, concentrating on high kicks for more points rather than the lower-scoring moves that Salim tended to favor. 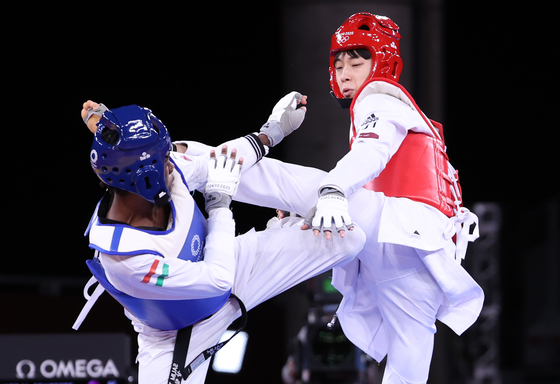 
After winning the first round 12-6,  Jang pulled ahead further with a 26-9 second round before sealing the deal by going up 8-1 in round three.

Jang's bronze medal comes at his first Olympics. The 21-year-old was expected to have a serious shot at gold, but had to settle for a third-place finish.

Earlier in the day, Sim Jae-young crashed out of the women's 49 kilogram division after losing to Miyu Yamada of Japan in the semifinals.

Taekwondo will continue tomorrow, with Lee Dae-hoon set to compete in the men's 68 kilogram division at 12:06 p.m. and Lee Ah-reum competing in the women's 57 kilogram at 1:16 p.m.