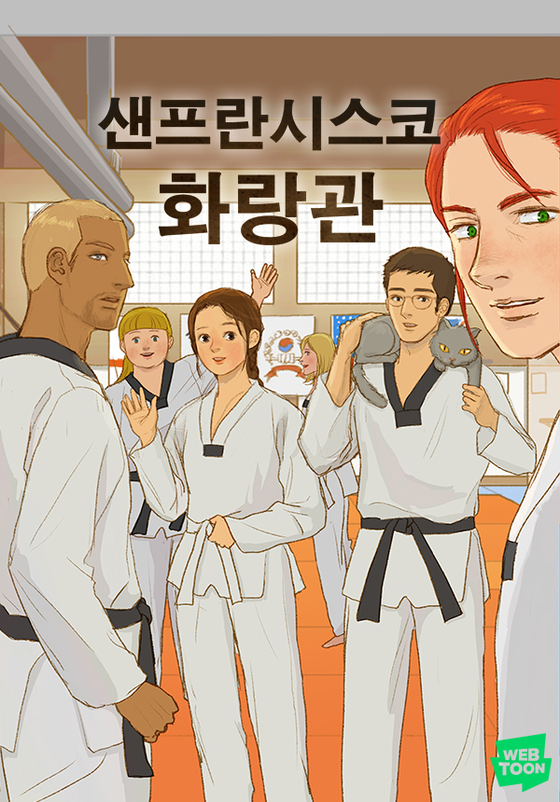 
Dolbae is a successful webtoonist, who even has had one of her works — “Mama Fairy and the Woodcutter” (2018) — adapted into a television series of the same title. Prior to her career in webtoons, she was just an “ordinary engineer” working for a game company in San Francisco. Because she only had moved her life to the U.S. for her job, there were many days when she was homesick, depressed and isolated.

On one of her run-of-the-mill days in San Francisco, Dolbae, who went by her real name Chang Hye-won, decided to take a day off after feeling particularly low. While taking a stroll in her neighborhood in downtown San Francisco, she happened to pass by a martial arts center called Hwa Rang Kwan, which was offering different martial arts classes including Korea’s taekwondo. With hopes that it could help her overcome her homesickness and enhance her spirit, she signed up.

This moment not only marked a turning point in Dolbae’s life which eventually led to her becoming a full time webtoonist on Korea’s major webtoon platform Naver Webtoon but is also how her debut webtoon “San Francisco Hwa Rang Kwan” (2013) begins.

“It was back in 2010 when I started taekwondo in San Francisco,” Dolbae told the Korea JoongAng Daily. “I started off with a white belt, like everyone else. By the time I got a green belt, I was so into taekwondo that I wanted to tell the world about it, about how great it is. I knew I was not good with words but as I could draw, I began drawing cartoons about my experience with taekwondo.” 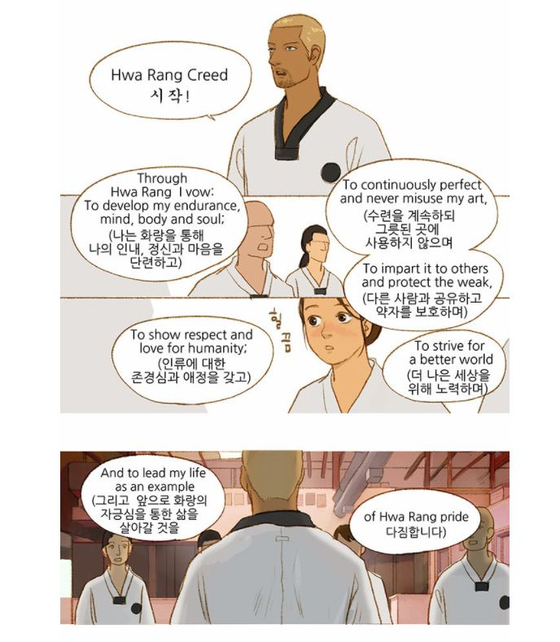 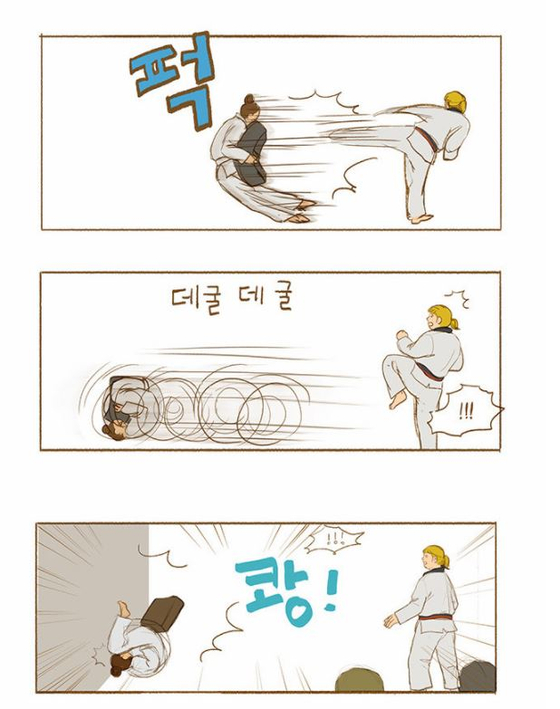 
Dolbae said she had never even considered debuting as a webtoonist and was just posting her cartoons online hoping that other people, especially those who are feeling weary, could enjoy and benefit from the sport as well.

“I wanted to detail out everything I could share with the general public who may not be familiar with taekwondo and be encouraged to start it as well,” she said. “I also wanted to remember how I felt about taekwondo when after I had just started it and how I loved it so much by leaving a record of it for myself like a diary.” Dolbae currently holds a second degree black belt.

Though Dolbae has fictionalized many of the characters and stories in the webtoon, Hwa Rang Kwan in San Francisco still exists. 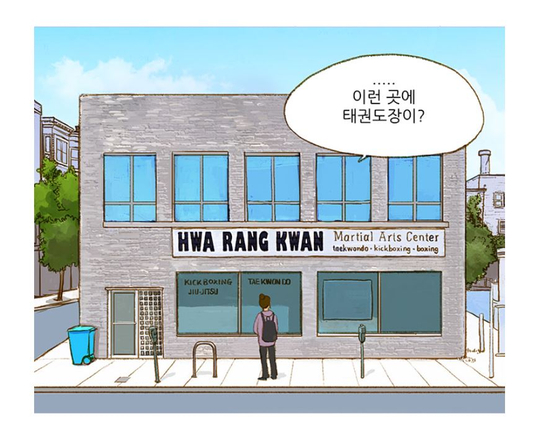 A scene in the webtoon where Hwa Rang Kwan in San Francisco is introduced for the first time. [NAVER WEBTOON]


“I was so shocked at first to find out that so many of my readers were visiting Hwa Rang Kwan in San Francisco to check it out,” she said. “That’s why I left a little footnote at the end of one of the episodes asking that people please not visit because I was worried that I may be causing inconveniences to the instructors and the trainees at the center.”

However people at Hwa Rang Kwan, according to Dolbae, were excited about her webtoon and even displayed the hardcopy version of “San Francisco Hwa Rang Kwan,” which was released in six volumes in 2017, on the center’s counter.

“I heard that some of my old friends there even studied Korean to read it. They said it took them six months to read it,” she said. “It would be great to publish the webtoon in English and contribute to the globalization of taekwondo."

In the minds of Koreans, taekwondo is an intangible cultural heritage of humanity that inspires patriotism, somewhat like kimchi and hanbok, or traditional Korean dress.

Officially developed as a unified style of martial arts in the 1950s, the roots of taekwondo stretch back nearly 5,000 years, incorporating elements of many traditional Korean martial arts.

In fact, even before hallyu, or Korean wave, swept the globe, the Korean taekwondo associations and the Korean government pushed for the globalization of the sport. The Ministry of Culture, Sports and Tourism says taekwondo is actually the country’s first successful cultural export, holding overseas competitions and dispatching taekwondo practitioners overseas from as early as the 1970s.

According to World Taekwondo, the main governing federation, there are now 210 member nations, as well as a refugee representative.

Recognizing its popularity as a “global sport that has gained an international reputation” and its benefits of cultivating “mental strength as well as physical fitness,” the U.S. state of California has recently designated Sept. 4 as “Taekwondo Day.” 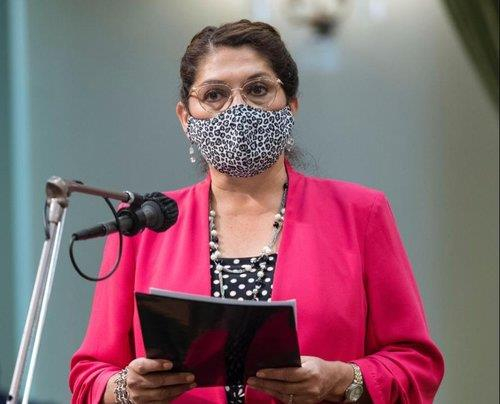 California State Assembly member Sharon Quirk-Silva (D-Fullerton) announces on July 15 that the resolution to designate Sept. 4 as ″Taekwondo Day,″ introduced by the assemblywoman, has been unanimously passed by the state assembly. [YONHAP]

On July 15, the California State Senate unanimously passed the resolution, saying that “Taekwondo Day will honor the rich culture the Asian-American community has brought to California and the U.S., as well as the historic impact it has had.”

Dolbae said she jumped for joy when she heard the news.

“It feels like my favorite celebrity has won the most prestigious award,” she said. “Though my experience only speaks for a part of my time in the U.S., I really felt like, along with other forms of martial arts, many Americans, regardless of gender and age, were enjoying taekwondo. It was already a part of their culture.”

Perhaps the best example of taekwondo’s successful globalization would be the 2020 Tokyo Olympics that came to an end Sunday. 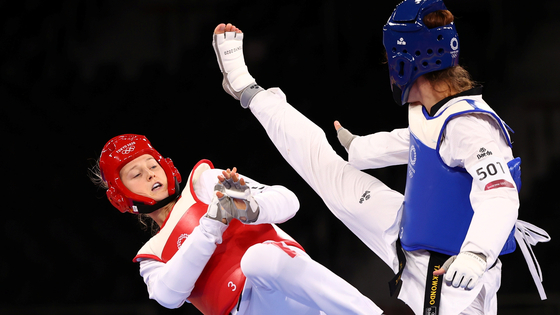 Lauren Williams of Britain in action against Matea Jelic of Croatia during a gold medal match on July 26. [REUTERS/YONHAP]


Prior to the Games, the government, public and overseas organizations, were almost certain that Korean athletes would be taking home golds from the taekwondo events. But for the first time since taekwondo became an Olympic sport in 2000, Korea failed to win a single gold in taekwondo across all disciplines. Instead, eight gold medals were shared by seven countries. Russia won two while the U.S., Serbia, Uzbekistan, Italy, Croatia and Thailand, each took one.

“Although Korean athletes failed to bring home gold medals in taekwondo, we see it as a victory for the Korean sport as such diversity of nationals underscores its significance in the world,” said Yang Jin-bang, head of the Korea Taekwondo Association.

According to the World Taekwondo, this “self-defense discipline is practiced by more than 70 million practitioners from more than 200 countries.” 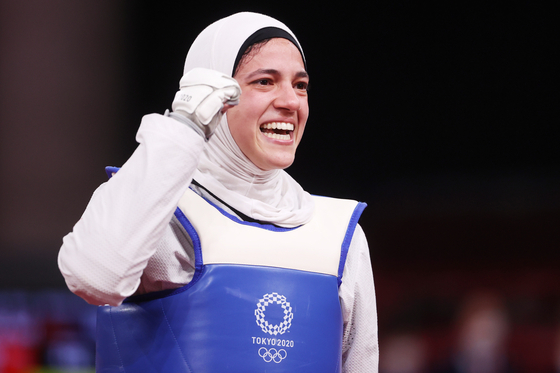 Hedaya Wahba of Egypt celebrates after defeating Paige McPherson of the United States in their bout during the Women's -67kg Bronze Medal Contest at the Tokyo 2020 Olympic Games at the Makuhari Messe convention center in Chiba, Japan, on July 26. [YONHAP] 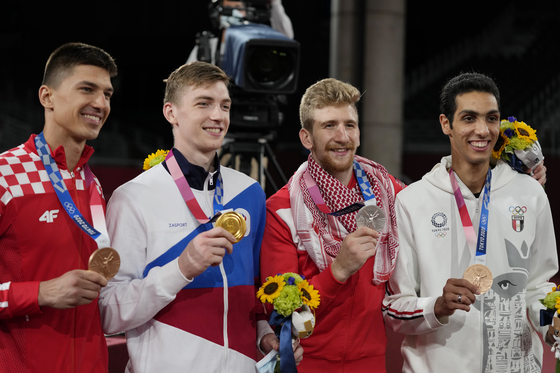 Medalist Croatia's Toni Kanaet, left, Maksim Khramtsov of the Russian Olympic Committee, second from left, Jordan's Julyana Al-Sadeq , second from right, and Egypt's Seif Eissa hold medals as they pose for photographers after a ceremony for taekwondo men's 80kg at the 2020 Summer Olympics on July 26. [REUTERS/YONHAP]


Insiders say taekwondo’s enduring international popularity is in part due to the fact that it requires neither expensive equipment nor high maintenance grass fields.

“What sets taekwondo apart from other martial arts, ultimately making it more attractive, at least for me, is that it uses both hands and feet, allowing both aerobic and muscle exercise,” said Dolbae.

“It also helps you to focus and concentrate and the strict etiquette and discipline required on the mat actually helps children and tired members of the society. The format of getting promoted and achieving the upper-level belts also gives a sense of accomplishment.”