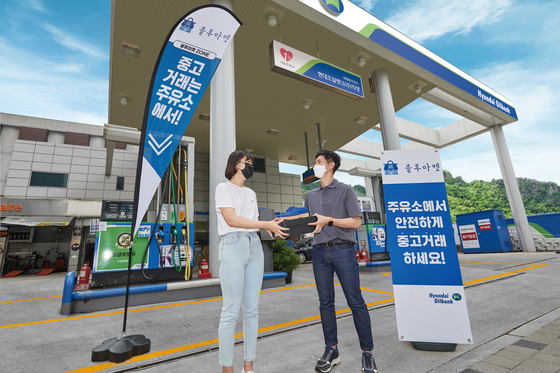 Hyundai Oilbank on July 5 started a secondhand trading service — Blue Market — that allows its app users to freely register secondhand products they would like to sell and trade them at its 352 gas stations across the country. [HYUNDAI OILBANK]

Gas stations are no longer places just to fill the tank. They are used for trading secondhand products, parking electric bikes and even generating solar power.

Oil refiners are desperately expanding their portfolios to keep their businesses afloat as Korea pushes to become a “zero carbon” society. The country has the fifth-largest oil refining capacity in the world, but the industry's high carbon emissions mean that with the title also comes serious concerns about sustainability.

The four largest oil refiners of the country — Hyundai Oilbank, SK Innovation, GS Caltex and S-Oil — are the most enthusiastic players in terms of seeking new business opportunities using their gas station footprints.

Hyundai Oilbank on July 5 started the Blue Market secondhand trading service available via its Blue app. The service allows users to freely register secondhand products they would like to sell and trade at its 352 gas stations across the country.

The company said the service has two advantages: great accessibility and safety.

Gas stations are usually located at transportation hubs or near towns where many people live. Also, gas stations have closed-circuit television cameras, which can assure safety between traders.

The oil refiner has also teamed up with Coupang and has been offering space at gas stations in the greater Seoul area as logistics centers since end of 2019. The space has been used for Coupang’s Rocket Delivery, a same- and next-day delivery service, and Coupang pays rent. 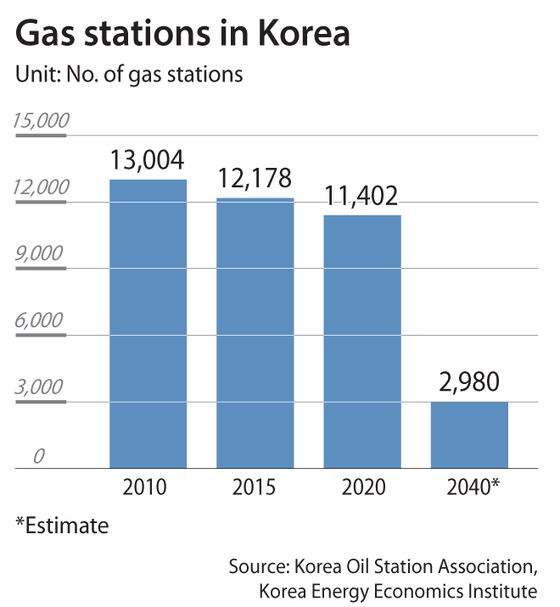 The number will plunge to 2,980 in 2040, according to an estimate by the Korea Energy Economics Institute.

SK Energy, the oil-refining subsidiary of SK Innovation, is using its gas stations as facilities for solar power generators. 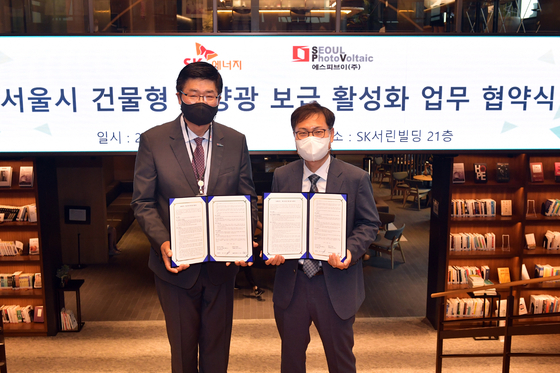 
SK Energy's production capacity, which currently stands at 2.2 megawatts, will be expanded to 3.6 gigawatts by 2030, the company said. That can power 1.1 million households per year.

At present, 17 gas stations in Seoul are used, and that will be increased to 50 by the end of the year.

GS Caltex and S-Oil are betting on the mobility businesses. 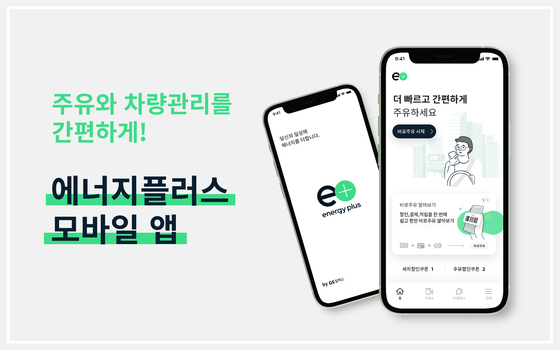 GS Caltex recently introduced an app called Energy Plus, which allows customers to input their preferences, such as type of gas, volume, and payment method before they visit gas stations. [GS CALTEX]

According to GS Caltex, it gave gas stations a new name — Energy Plus Hub — which it defines as a “platform that not only supplies energy to vehicles, but also offers lifestyle services.”

The company aims to redesign its gas stations as energy charging spaces that offer electricity for electric cars, as well as mobility and even logistics.

The oil refiner currently operates 100-kilowatt-hour electric vehicle (EV) chargers at about 44 gas stations across the country. It aims to increase the number to 160 by 2022.

The Korean company recently started offering an app called Energy Plus, which allows customers to input their preferences, such as type of gas, volume and payment method, before they visit gas stations. When people arrive at the stations, they can just use a barcode or pin number, which will help them to fill their vehicles.

GS Caltex has been running the beta service at about 240 gas stations across the country, and plans to formally offer the app in September. The number of available gas stations will increase to 800 by the end of the year, GS Caltex said.

“With the introduction of the app, GS Caltex was able to build a platform that offers customers a service that helps their vehicle management,” said a spokesperson for GS Caltex. “Based on the app, GS Caltex will try harder to discover more services that aim to strengthen convenience.” 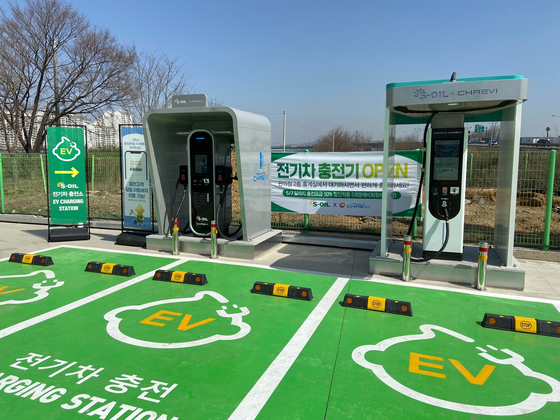 
Since April, S-Oil has been running an EV charging station at its gas station in Paju, Gyeonggi. The charging station is a complex energy station that can supply all types of gas, including gasoline and liquefied petroleum gas, as well as electricity, according to the company.

The gas station has two chargers - a dual model and a single model. They are 100-kilowatt high-speed chargers which can charge an EV up to 80 percent in only 30 minutes. Almost all EVs in Korea including Hyundai Motor's Ioniq 5 and Kona EV and Kia's EV6 are able to charge with the charger.

"With the EV chargers, S-Oil will prepare for the era of the EV by accumulating know-how of the EV infrastructure market," said a spokesperson for S-Oil. "We will expand the number of EV charging services in our gas stations in the future."

For Korea's oil refiners, Q2 was a golden period