Analysts have predicted that the first few months of 2020 would be an unprecedented disaster for Korean oil refiners.

One by one, quarterly earnings announcements from the industry’s top companies are proving them right. 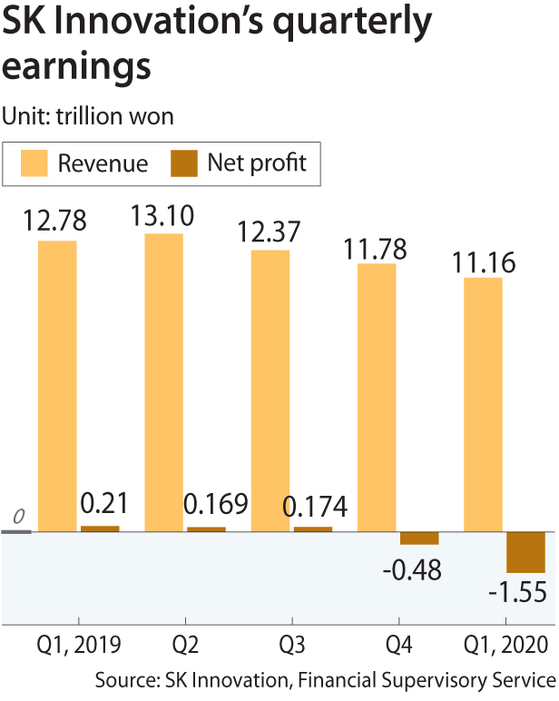 SK described the current situation as “the worst business environment since 1962” when it first set foot in the industry.

Its oil business alone recorded an operating loss of 1.6 trillion won in the first quarter. More than half of that, 941.8 billion won, was the result of inventory valuation loss as crude oil prices crashed. The Covid-19 pandemic also pulled down demand and prices for its refined products, especially jet fuel and gasoline, resulting in the company’s lowest quarterly revenue since 2017. Low demand also weakened the refining margin.

“The Covid-19 [outbreak] and slumps in international oil prices aggravated a negative market environment that had already been in a severe state since last year,” the company said in a statement.

Crushed by oversupply and slow demand due to the pandemic, refining margins — the difference in price between the crude oil and the refined product — dipped below zero in March and remained there for seven weeks through the following month. The break-even point for domestic refiners is around $4 per barrel, meaning companies have been losing more money the more products they make for roughly two months.

The situation hasn’t been much different for its local competitors.

S-Oil, which was the first domestic refiner to announce its quarterly performance last week, reported a net loss of 880.6 billion won during the first quarter. Hyundai Oilbank’s net loss during the same period was 462.2 billion won.

GS Caltex, the second-largest oil refining company in the country, is the only one among Korea’s top four that has yet to announce its quarterly earnings. Local analysts expect that the four would see a combined loss of around 4 trillion won in the year’s first quarter.

But there have been some positive signs that international oil prices are recovering. On Tuesday, the price of U.S. Western Texas Intermediate futures had risen to 20.4 percent, marking a five-day rally amid growing anticipation that countries will end their lockdowns and producers will further cut supply. The sentiment also follows an agreement reached by members of the Organization of the Petroleum Exporting Countries Plus last month to reduce production by 9.7 million barrels a day in May and June.

But future demand remains uncertain. Second-quarter earnings are unlikely to be positive — refiners still have stock piled up and it’s unclear how quickly the global economy will rebound.

Jet fuel, which accounts for 10 to 20 percent of refiners’ revenue, saw consumption plummet 23 percent on year to 7.3 million barrels in the year’s first quarter, according to the Korea National Oil Corporation. This is the second-lowest figure over the past decade after 2011.

Industry analysts expect that the possibility of a sharp demand recovery in the near future is slim.

“The weakening demand for jet fuel and gasoline is expected to increase through the year’s second quarter,” said Lee Dong-yeol, head of SK Energy’s corporate planning office during a conference call. “We expect normalization to start after June once the Covid-19 outbreak has ended.”