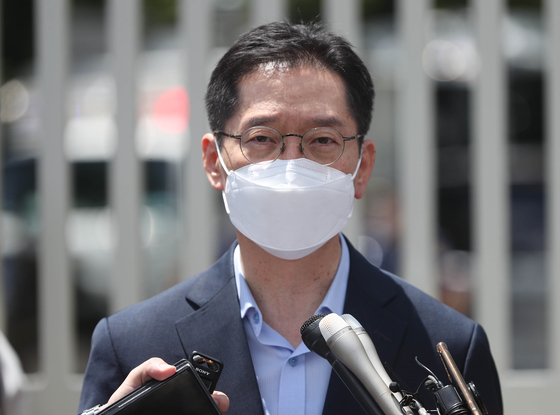 Kim was jailed at the Changwon Correctional Institution to complete his two-year sentence. He has one year and nine months left to complete the term.

Last Wednesday, the Supreme Court upheld a high court ruling that Kim, a longtime political ally of Moon, was guilty of colluding with political blogger Kim Dong-won, better known by his online alias Druking, to mount an online campaign beginning in November 2016 to support Moon’s 2017 election bid. Moon won the snap election in May 2017, which came after his predecessor, Park Geun-hye, was impeached and ousted for corruption and abuse of power.

With the Supreme Court ruling, Kim lost his governorship. Deputy Gov. Ha Byeong-pil took over as the acting governor.

Following Wednesday’s conviction, the prosecution requested Kim to start his prison sentence Thursday, but he asked for a delay. The prosecution granted his request, and Kim was admitted to the prison Monday afternoon.

Kim held a press conference outside the prison gate to protest his innocence. “The judiciary failed to lay bare the truth, but that does not change the truth,” Kim said. “Although the truth was ignored, I believe it will eventually return to its place.”

“I will exercise my patience during the ordeal before me and come back,” he said, and then entered the prison.

Kim was jailed for 77 days in 2019 after the Seoul District Court convicted him and ordered immediate imprisonment. In April that year, the Seoul High Court released him on bail to allow him to work as governor, and he went through the appeals without detention.

Supporters and protesters gathered outside the prison, and police dispatched troops to prepare for any possible clash. Among the supporters who came to bid farewell to Kim were Reps. Ko Min-jung and Kim Jung-ho of the ruling Democratic Party (DP).

Meanwhile, the South Gyeongsang Provincial Chapter of the main opposition People Power Party (PPP) issued a statement on Monday and demanded that a by-election be held in October.

“If the governor post remains vacant until June next year, that will be nearly one year of absence,” it said. “Acting Governor [Ha] will only manage the policies that had already been decided. He cannot push forward new policies for the residents.”

The provincial chapter also expressed concern that the province won’t be able to secure sufficient funds for major projects next year when the legislature holds a budget session in October. “As the law stipulates, we must hold a by-election on Oct. 6,” it said.

Lee Ju-young, a former five-term lawmaker of the PPP who once served as the deputy speaker of the National Assembly, also said a by-election must be held in October. Lee is preparing a campaign to run for the post.

Some PPP politicians, however, opposed the idea of spending over 30 billion won ($26 million) to hold a by-election in October to elect a successor to serve only eight months.

The South Gyeongsang Provincial Election Commission said it will hold a meeting on Tuesday to discuss whether or not it will hold the by-election.

According to the Public Official Election Act, a by-election of a local government head is supposed to be held on the first Wednesday of October that year, in the case that the post is vacated between March 1 and Aug. 31. The law, however, also states that if the term is less than one year from the election day to the expiration day of the term of office, holding a special election is not mandatory.