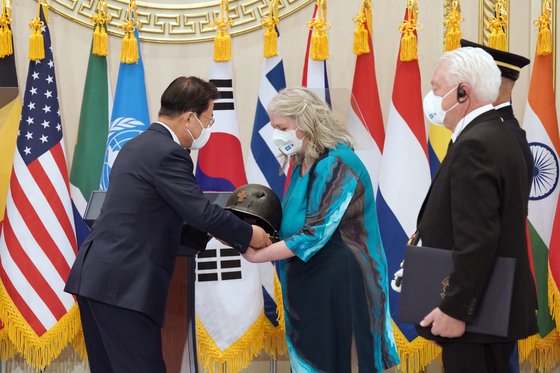 President Moon Jae-in, left, awards a state medal to the late Emil Joseph Kapaun, a U.S. Army chaplain who died in the Korean War, and presents a helmet with a cross to his nephew Ray Kapaun and his wife in a ceremony at the Blue House Tuesday recognizing two United Nations Forces veterans who fought in the war. [BLUE HOUSE]

The late Emil Joseph Kapaun, a U.S. Army chaplain, and former Australian Brigadier Colin Nicholas Khan were recognized at a ceremony attended by their relatives, diplomats and military officials held at the Blue House to mark the UN Forces Participation Day.

Kapaun, a Roman Catholic priest who served as a U.S. Army captain and died in service, was presented the Taegeuk Order of Military Merit, the highest decoration for military bravery.

Khan received the Order of Civil Merit, Seogryu (Pomegranate) Medal, awarded to those who have contributed to national development.

Moon said in a speech at the ceremony, "The UN's participation in the Korean War engraved in the world's history the lesson that solidarity and cooperation can protect freedom and peace."

Kapaun, a Kansas native, participated in the Korean War since July 15, 1950, and was captured by enemy forces while saving wounded comrade soldiers despite a pullout order amid an airstrike by the Chinese army.

He was sent to prison camp, and was known for helping to care for friends and foes alike, despite his own ill health.

He eventually died in captivity on May 23, 1951, and had been considered to be missing in action.

However, Kapaun's remains were finally found last March, 70 years after his death, at the National Memorial Cemetery of the Pacific in Hawaii and returned to his family.

His nephew Ray Kapaun received the medal on his behalf during the Blue House ceremony. The president also presented an iron helmet with a cross symbol to Kapaun's family.

Khan, now 91, joined the Korean War in 1952 as a front-line platoon commander of the Australian Army. He conducted fighting and reconnaissance patrols against the enemy forces and eventually sustained serious gunshot wounds while on duty and was sent home.

He went on to share with the world the devastation of the Korean War as well as South Korea's miraculous post-war development. He has continued to engage in activities to strengthen friendly relations with South Korea including contributing to the establishment of the Australian National Korean War Memorial in 2000.

Khan's great-grandniece received the medal on his behalf due to his health problems. The president also presented to Khan's family a memorial tablet made out of granite mined in Gapyeong, where the Australian Army fought a battle during the Korean War.

Khan said in a video message, "I played a very small part in the great and outstanding reconstruction that we see in South Korea today. So any order that I get, I take with great humility, and I would accept it with great pride because I have grown and developed a great admiration for the Korean people."

Tuesday also marked the 68th anniversary of the armistice agreement that ended the Korean War on July 27, 1953.

The ceremony was attended by Gen. Paul LaCamera, commander of the U.S. Forces Korea and the United Nations Command, Cardinal Andrew Yeom Soo-jung, the archbishop of Seoul, and diplomats from the United States, Australia and the Vatican in South Korea.

The event commemorated the sacrifices and contributions of some 1.95 million UN troops from 22 countries who fought for South Korea during the war.

In appreciation of the armed forces