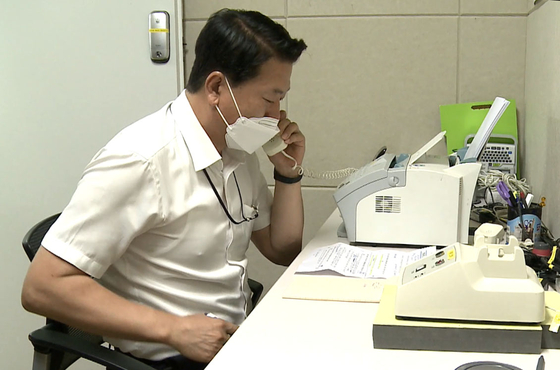 A South Korean official makes a call through the Panmunjom line at the inter-Korean truce village in Paju, Gyeonggi, Tuesday morning. The two Koreas restored all communication lines that day after 13 months. [UNIFICATION MINISTRY]

South and North Korea restored all hotlines Pyongyang pulled the plug on 13 months ago.

The two leaders agreed to “restore mutual trust between the two Koreas as soon as possible and move forward with the relationship again,” said Park.

On June 9, 2020 Pyongyang unilaterally cut off all inter-Korean communication lines in protest of what it claimed were Seoul’s failures to prevent activists from sending propaganda leaflets across the border. It blew up a joint liaison office in Kaesong a week later on June 16.

Before that, the two Koreas’ military authorities held regular telephone calls at 9 a.m. and 4 p.m. over their eastern and western communications lines.

Seoul’s Ministry of National Defense said Tuesday that the military hotlines are back to normal operation and that the two Koreas will resume regular daily calls. The two sides are also able to send faxes again.

The ministry said some technical problems were found in the eastern line and repairs will be made.

The South’s Ministry of Unification said that a phone call was successfully carried out through the Panmunjom channel at 10 a.m. Representatives of the inter-Korean liaison office also made a three-minute phone call at 11:04 a.m. after slight technical difficulties earlier that morning.

The Unification Ministry “welcomed” the restoring of the lines and added that the two sides agreed to communicate twice daily at 9 a.m. and 5 p.m. through these channels.

The South Korean representative conveyed to the North during the call, “As the inter-Korean communication network has been restored, we hope that good news will continue to be delivered to all Koreans.”

Personnel working at the inter-Korean liaison office in Kaesong have been based in Seoul since early last year after the two sides agreed to shut down the office due to Covid-19 concerns. Thus, this communication line still exists despite the North blowing up the Kaesong office. 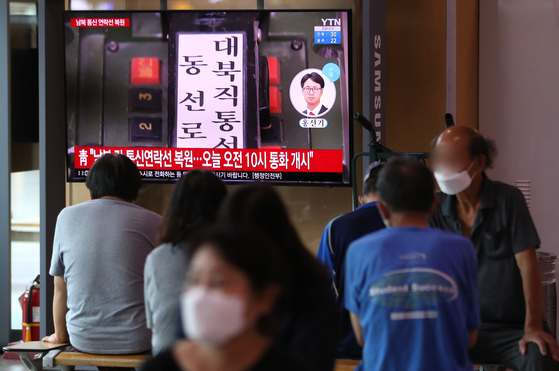 Pyongyang also confirmed Tuesday the restoration of the communication liaison lines through state media, and predicted a “positive effect” on inter-Korean relations.

"Now, the whole Korean nation desires to see the north-south relations recovered from setback and stagnation as early as possible," the North’s official Korean Central News Agency (KCNA) said in an English-language report.

It continued, “The top leaders of the north and the south agreed to make a big stride in recovering the mutual trust and promoting reconciliation by restoring the cutoff inter-Korean communication liaison lines through the recent several exchanges of personal letters.”

The announcement came on the 68th anniversary of the armistice agreement that ended the three-year Korean War on July 27, 1953.

The direct line at Panmunjom dates back to 1971.

North Korea has severed various channels of communication with the South in times of deteriorated relations over the years.

The restored communication lines come after 413 days, a first step to improving inter-Korean relations. North Korea, which has closed off its borders since early 2020 amid the coronavirus pandemic, faces economic difficulties and food shortages.

Denuclearization negotiations have been at a standstill since the collapse of a second summit between North Korean leader Kim and former U.S. President Donald Trump in Hanoi, Vietnam, in February 2019. The Joe Biden administration has offered to meet with the North “without preconditions,” though it is unclear if it will bring any incentives such as sanctions relief to the table.

With the news of letter exchanges, there has been speculation this could bring about a virtual summit between Moon and Kim.

However, a Blue House official said Tuesday there have been no discussions of an inter-Korean summit and said that the two sides exchanged letters in April to mark the third anniversary of the 2018 Panmunjom agreement.

The two leaders continued to exchange letters up until recently, said the official, and discussed “the need to restore relations and trust for peace on the Korean Peninsula,” as well as overcoming the Covid-19 situation and recovery from heavy rainfall.