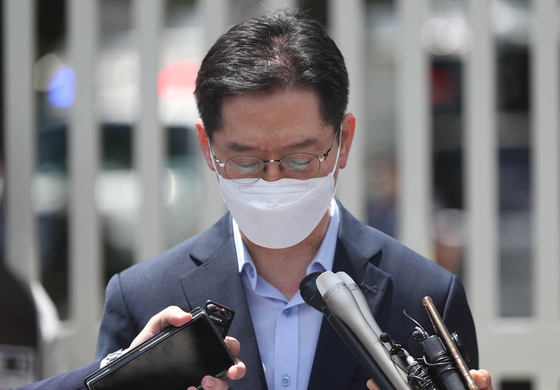 Former South Gyeongsang Governor Kim Kyoung-soo speaks to his supporters before going back to prison on Monday. He was jailed at Changwon Correctional Institution. [YONHAP]

The post became vacated last week after the Supreme Court upheld Kim’s conviction and two-year prison sentence. Kim, who won the post in the 2018 local election as a candidate of the ruling Democratic Party (DP), was jailed Monday for conspiring with a political blogger to manipulate online public opinion to help President Moon Jae-in win the 2017 election.

Opinions were split in the political arena whether or not a by-election should take place to elect Kim’s successor.

According to the Public Official Election Act, a by-election of a local government head is supposed to be held on the first Wednesday of October that year, in the case that the post is vacated between March 1 and Aug. 31.

The law, however, also states that if the term is less than one year from the election day to the expiration day of the term of office, holding a special election is not mandatory.

The South Gyeongsang Provincial Election Commission held a meeting of experts on Tuesday in which it was decided that it will not hold a by-election. Chief Justice Lee Chang-hyeong of the Changwon District Court chaired the meeting as the commission chairman. Seven others including two members recommended by the ruling DP and the main opposition People Power Party (PPP) also attended the meeting.

According to the commission, opinions were split. Some experts argued that a by-election must take place to guarantee the South Gyeongsang voters’ suffrage and minimize the administrative vacuum of the provincial government.

Others argued that the by-election should not take place, taking into account the additional cost and public health issues that could arise from holding an election amid the resurgence of Covid-19. They also pointed out the new governor’s tenure will be only eight months, until the June 1, 2022, local election, but the cost of holding a by-election would be over 30 billion won ($26 million).

Following the election commission’s decision to not hold a governorship by-election, Deputy Gov. Ha Byeong-pil will fill in as the acting governor.

The PPP’s South Gyeongsang Provincial Chapter issued a statement on Monday and demanded a by-election be held in October.

The provincial chapter expressed concern that the province won’t be able to secure sufficient funds for major projects next year when the legislature holds a budget session in October. “As the law stipulates, we must hold a by-election on Oct. 6,” it said.

Some civic groups also demanded that a by-election be held.

They said four South Gyeongsang governors, including Kim, have so far failed to complete their four-year tenure, and the provincial government has frequently been operated by an acting governor. Residents are disappointed at such precedents and a by-election is necessary to end this undesirable political practice, they said.