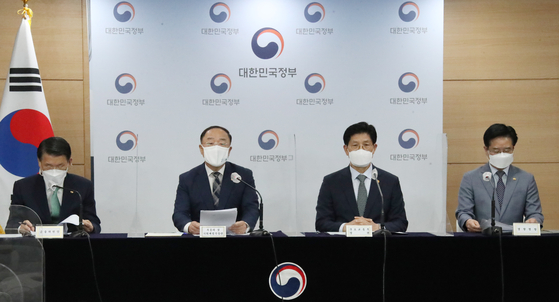 Finance Minister Hong Nam-ki warned of a bubble in the real estate market and cautioned the public about buying -- and getting burned.

"Multiple indices related to residence prices ... are near their peak or have passed their peak," Hong said during a joint press briefing with the Ministry of Land, Infrastructure and Transport, the Financial Services Commission and the Korean National Police Agency Wednesday. "Rather than panic buying out of fear, right now is the time [people] need to be careful with their choices."

The briefing was an attempt by Hong, who is also deputy prime minister for the economy, to calm the market. He claimed there could be a crash in real estate prices as in past financial crises like the 1997 Asian financial crisis and the 2008 global financial meltdown.

"If there is a price fall," he said, "I suspect the price adjustment could be greater than market projections."

Hong added that a possible hike in interest rates by the central bank and tightening in loans by the country's financial regulators in the latter half of the year could limit liquidity and lead to a reversal in the real estate market.

But not all analysts foresee a slump in real estate prices soon.

"Even if the central bank raises interest rates, it is not likely to be a large hike," said Park Won-gap, head researcher for real estate at KB Kookmin Bank. "So I don't think it will become a serious burden [for households] although some people that borrowed to invest could be affected."

Some said the supply situation for residential real estate could lead to further increases, not a crash.

"When property prices fell without any external factors, there were massive supplies, like in the past when 2 million houses were provided," said Shim Kyo-un, a professor of real estate studies at Konkuk University. "The government's plans for new supplies mostly come after 2023 and even those supplies are uncertain, so it is not likely there will be a big price adjustment for now."

According to Land Minister Noh Hyeong-ouk during the briefing, the government will be supplying an average 560,000 residences nationwide, and 310,000 in the greater Seoul area every year for the next 10 years.

However, according to data from the Land Ministry, new residence supplies in the country have been decreasing every year from 626,889 in 2018. Last year the figure was 471,000. For the first five months of this year, 144,000 new residences were supplied, a 23.8 percent decline on-year.

"Even if the property market poses a big risk, I'm not sure if it was right for the country's deputy prime minister to mention possibilities of price declines," said Kwon Dae-jung, a professor of real estate studies at Myongji University. "It is a problem if residential real estate prices are too high, but price falls could also be a burden on the economy."

At the briefing, Financial Services Commission chief Eun Sung-soo said regulations on loans will be tightened in the latter half of the year to bring down the growth in household debt and prevent excessive liquidity from affecting the property market.

"There could be some criticism and side effects but we will put our utmost efforts into curbing the household debt growth rate," Eun said.

According to Eun, the goal is to limit annual household debt growth to around 5 to 6 percent this year. In the first half of this year, the growth rate was 8 to 9 percent.